Jaroslav Rudis - creator of Alois Nebel, the star of the brutally beautiful 'White Creek' and its follow up 'Main Station'

In this week's One on One Jan's guest is Jaroslav Rudis, one of the Czech Republic's most exciting new authors. He's one of the creators of a cult graphic novel called White Creek, based on the exploits of a very unusual Czech train dispatcher. The dispatcher, named Alois Nebel, appears to suffer from delusions on his railway line. All the same, his visions cast some of the events of 20th century borderland Czechoslovakia in sharp relief, making for a thrilling read.

Jaroslav Rudis - creator of Alois Nebel, the star of the brutally beautiful 'White Creek' and its follow up 'Main Station'

White Creek and its newly released follow-up, Main Station, which you can see in ads splashed all over the capital, were both beautifully illustrated by Jaromir 99, while the text was written by Jaroslov Rudis. On the release of the new book we caught up with Jara Rudis at a popular Prague café. We began by discussing his character Alois Nebel in more detail.

"Our story is the story of a railwayman working at a small station near Jesenik, north-eastern Moravia, in the former Sudetenland, a railwayman who 'sees' what other people can't. He has visions in the fog. He's a bit... maybe ill, mentally ill, but perhaps not. Nebel means 'mlha' in Czech, or fog, but you can also read it flipped backwards as 'leben', which in German means 'life'. Hidden in the name are different levels of meanings. Nothing is ever just black & white, but you have different shades."

Alois Nebel is also a small character, middle-aged, a bit dumpy; Czech fiction has a long tradition of the "little guy" and I wondered if you took that tradition into account when creating Alois?

"Well, I couldn't do it a different way: it's somewhere deep in me - I like Hrabal, I like Jaroslav Hasek, and I like the idea of these small guys 'moving' the big world, or being destroyed by this huge world they can not understand. It's true that Alois Nebel is also this small guy, but on the other hand he knows a lot about Czech history. Through these 'foggy trains' on his railway he sees the whole century pass by, good and bad sides. There are German soldiers and there are Soviet soldiers, there is everything that destroyed this region in the last century." 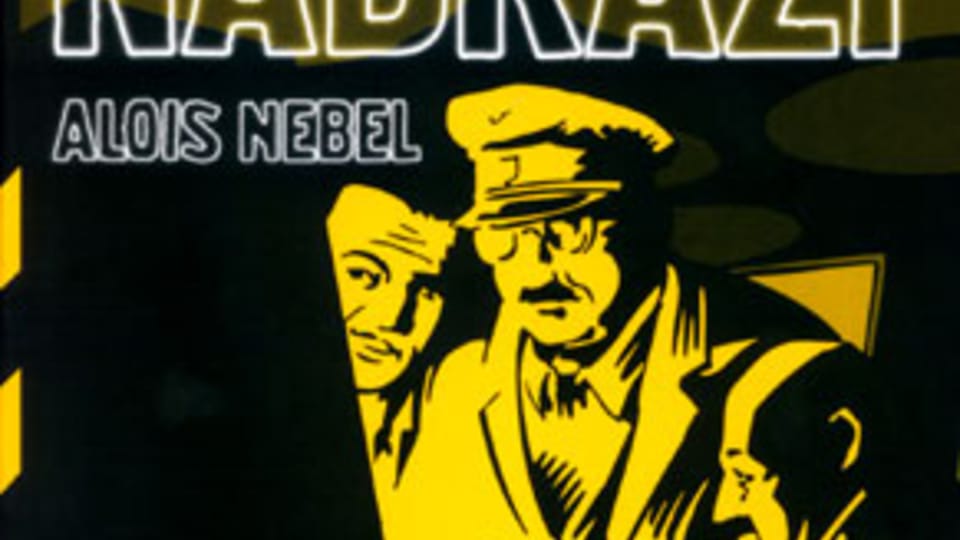 Would you say that the Jesenik region in a way remains haunted by that history?

"Definitely. Not just Jeseniky but the whole Sudetenland region. Prague or Brno haven't changed so much as over there in the north or south in the border regions. There were like three million Germans living in Czechoslovakia - they are gone but they took also something with them. If you just take a train to Jesenik you definitely recognise the border between Bohemia or Moravia and the former Sudetenland. Perhaps the landscape didn't change so much but you have houses and castles and villages which look different to me. As a child for me it was a real discovery. I still connect the area with dark, romantic, melancholic feelings. Villages without people; totally destroyed houses, nobody living there; old cemeteries. Definitely this region is destroyed, but there is also living a third generation of people who want to find their own roots. Jaromir 99 is one, with his band based in Jesenik. They were trying to find a connection to this very moving history."

Which brings me to my next question - what was behind the decision to make White Creek a graphic novel?

"I've known Jaromir 99 for ten years. As musicians we lived together in Prague's working class district of Zizkov. Our pub was U vystreleneho oka - At the Shot-Out Eye - where we used to go. And, we were talking lots of times that we could do something together, because we found that we had a similar point of view, similar ideas. Jaromir suggested 'Let's do a graphic novel' - nobody here had done it before! But we were drinking a lot of beer in those days; you know it's a typical Czech thing: spending lots of time in the pub talking about what you could do if this and this and this happened. Czechs have lots of ideas but also lots of excuses! You know, that's a very typical Czech feeling! So, then we started to drink non-alcoholic beer, and we started to work. We started to discuss the story. He illustrated, I wrote, but the story was 'ours'."

What are the advantages of working of graphics like that? It obviously brings it much closer to the realm of the film story.

"Yeah, definitely! We called it a short movie but not so expensive. You don't need millions, just lots of energy and three months off." 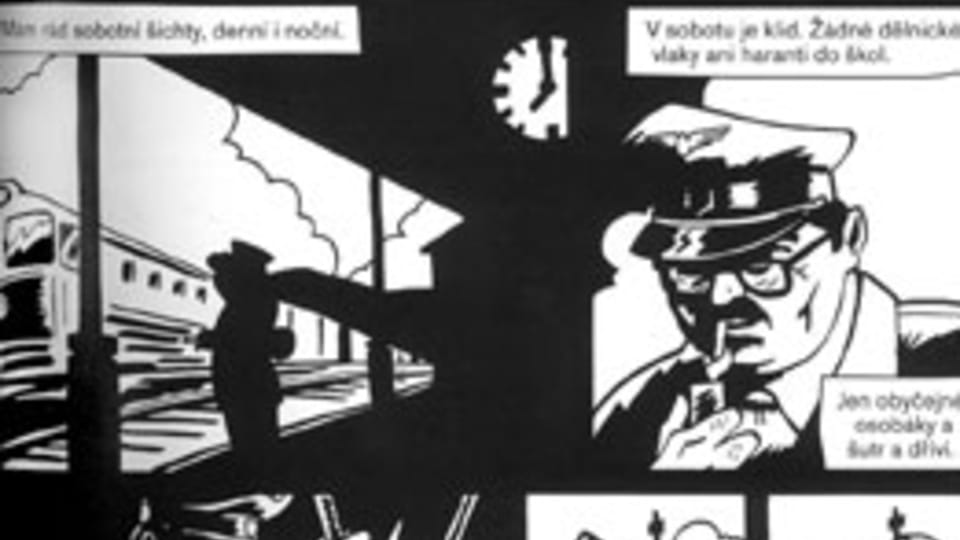 The continuation 'Hlavni nadrazi' or Main Station, has now been published: where does that take Alois Nebel?

"Well, Prague's Hlavni nadrazi is not just the most beautiful railway station in the Czech Republic: it is perhaps the most beautiful in central Europe. At least, that's what railway fans say. The first part of the series 'Bily potok' - White Creek - took place in the '80s, whereas the follow-up is set in the '90s. So, after the change. And, after the change Alois Nebel decides he has like a big railwayman dream: to visit this most beautiful and well-known railway station. He takes his train and after six hours arrives in Prague. But, he doesn't discover Prague at all, but just Hlavni nadrazi, because he knows that 'if somebody leaves the railway station they don't find their way back'. That's why he spends one year at the main station! Because he is able to see what the other people can not see. He also uncovers its history, which is a bit moving. But, at the end of the story he goes back to the mountains."

Ultimately, how exciting was it to create a character, who, on the one hand, shares your fascination for trains and timetables and stations but on the other is clearly going insane?

"Definitely it helps you not to lie: lots of these stories are real. They really happened: we just collected them - also very typical in the Czech fiction tradition: this observation from real life. In White Creek there's a subplot of a Polish guy who was a murderer in Poland and escapes to the Czech Republic, where he ends up in a mental hospital. For two years he didn't say a single word, till one day the Polish police arrived and asked him 'Did you kill her?' and he replied 'Yes.'" 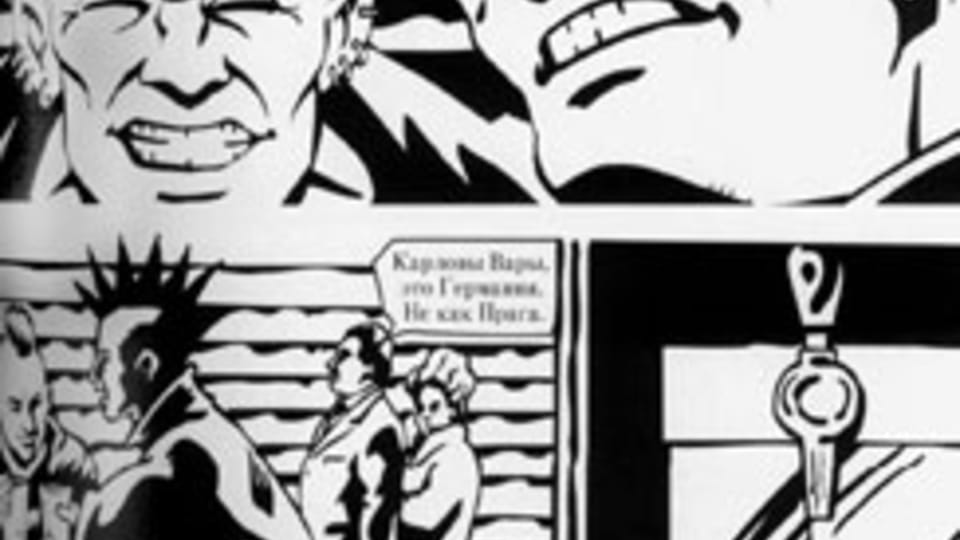 If you're interested in more info about Jaroslav Rudis' and Jaromir 99's joint comic book - including a limited upcoming English edition of "White Creek" - visit www.labyrint.net