In today's Arts we look at a project now on view at Prague's Galerie Rudolfinum, an exhibit of 70 large format photographs by Czech photographer Vaclav Jirasek. Titled Industria, the exhibition maps the decay of major industrial facilities that are part of this country's industrial heritage, once massive factories filled with countless workers, now falling into states of decay. In the pictures, steel shrugs off brick, slag is heaped up, and forgotten machinery dominates. Dust-filled light falls upon empty hallways, and old posters or instructions fade. Work stations abandoned, the space takes on a different life than its creators ever intended.

"We put together the show over a year, but the idea for Industria goes back to the 90s. At that time Jirasek began photographing a factory known as Vankovka near Brno, the first step towards the documenting of dying, closing factories in the Czech Republic. For a while he set it aside, but two years ago he returned to the theme. The Vankova photographs were still fairly romantic black & whites, relying on a Baroque interpretation of light and space. The new work is different.

Before, the photographer was not really as interested in capturing the factory in a naturalistic way. But, returning to the theme he began shooting colour, and suddenly the documentary mapping of such buildings and man-made sites came to the fore. The most significant work focuses on about five major factories. Large-scale prints that technically were quite difficult, but ultimately worth it."

Some of the images are truly stunning. I found myself staring at one photo fascinated by rails leading under a sealed door, wondering where they went. One of the central images then is a major hall lit from above by daylight, but so immensely cluttered by steel, grease, and metal tools that it seems to have last been entered years ago. Halls, store-rooms, former plants, slowly outlive their legacy awaiting either total collapse or total transformation. Either way, they will never again be what they once were; they will never be the same.

"We are now in a period when we are experiencing major change. You could say for the Czechs one of the milestones towards the end of the Industrial Revolution was 1989. In the first half of the 19th century we saw industry radically transform work and life, a process which is still continuing but also running down. A process of stratification, of movement of workers, and personal relationships. Once, people were tied to the land, but the industrial revolution saw major urbanisation and movement to the cities.

Countless thousands were absorbed in factories on the periphery. That time is at an end. In Prague, for instance, the last fifteen years have seen most industrial sites here fall empty. They are now brownfields, posing major ecological problems. Steel factories like Poldi Kladno existed for 150 years but closed in the last ten. The story of big industry now is a story of decay and disrepair."

But, perhaps the strongest element, a flip-side to empty spaces and industrial artefacts, is a series of portraits by Vaclav Jirasek of factory workers in work or safety gear, miners or metal workers, the way they appear every single day. Some of the expressions are haunting. There is nothing glorified or romanticised about such demanding and brutally physical work. Some stare back in the camera with confidence, others appear tired, still others' features are hidden by major protective gear. Other faces, those of miners, are simply stained black.

"It would be very effective to photograph just the factories which are appealing even as they fall into ruin, they remain monumental. But, in many factories, or parts of these factories, people still work. That is the opposite pole, one that is very revealing: these people are the exact opposite of what the media often show, these are people on the absolute periphery. Today's ideal is a person unmarked by numbingly heavy work, a person, who to some degree is fake.

The people in Jirasek's work are people whose everyday existence is under constant threat. People who can not adapt. Jirasek captured them - taking them away from their work against a neutral background for a few minutes at most and caught them, in effect: in their work clothes, protective clothing. The difference between past idealised presentations of the worker - and reality, some of these workers are just a step above homelessness - is enormous. Jirasek, has made them the focus of this exhibition, which I think is extremely important."

Petr Nedoma says that despite the rawness of some of the pictures, the photographer expresses solidarity with his subjects, who often are poor, and under extreme pressure. The clothes the men and one woman in the series wear are strictly utilitarian, clothes worn, in effect, to be destroyed.

"That's not something we see that often today: a complete lack of aesthetic interest, appearance here is not important, but function. Gear worn either serves to fully protect, or to be worn to shreds. Jirasek photographed his subjects against a neutral background when he could - of course many subjects refused to be photographed at all - but he photographed them against neutral backgrounds so that their individual personalities came out. His, is an attempt to show how each person is different."

As for their work stations, Jirasek captures at least minimal attempts by individuals to personalise their space, that Petr Nedoma reminds us, is entirely man-made.

"Even in this sterile man-made environment we see individual efforts to make the space at least somewhat more comfortable and human. Photos, pin-ups, and graffiti. That's not unusual. But, it forms a strong counterpoint to Jirasek's monumental industrial halls. Humanity still breaks through. Through the metal and dust."

The Industria exhibition is accompanied by a number of lectures as well as presentations and related screenings including a video installation by Taiwanese artist Chen Chieh-Jen, and films on the Industrial Age, including Charlie Chaplin's Modern Times and Fritz Lang's Metropolis. You can find all the information you need at www.galerierudolfinum.cz

Industria continues at the Rudolfinum until April 30th. 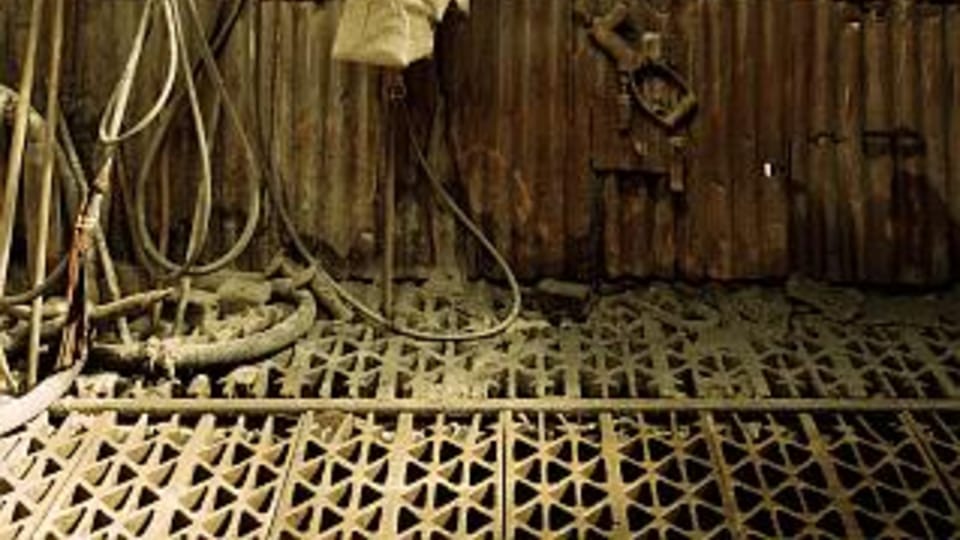