Dvůr Králové Zoo is spearheading an international effort to save the Northern White Rhino which is on the brink of extinction. Last week an international team of experts trying to produce the world’s first test tube baby rhino made international headlines. I asked Dvůr Králové Zoo’s special projects coordinator Jan Stejskal, who is a member of the team, to report on the latest progress.

Jan Stejskal checks on Fatu, the youngest of the two northern white rhinos on the planet the day before the procedure on Ol Pejeta Conservancy, photo: Ami Vitale

“We achieved quite a breakthrough in our efforts to save the Northern White Rhino. Last week, on August 22nd, we were able, for the first time, to successfully harvest eggs from the last two Northern White Rhino females in the Ol Pejeta Conservancy. These two last females, Najin and Fatu, were born in the Czech Republic in Dvůr Králové Zoo. One is 19-years-old and the other is 30-years-old and they were transported to Kenya in 2009.

"In 2014, doing a health check, we found that neither of them is able to conceive naturally and since then we have been cooperating with experts from Berlin and Cremona to develop methods that would allow us to collect eggs from these last two females and then produce a pure Northern White Rhino embryo.

Fatu is undergoing the ovum pick-up procedure performed by Prof. Dr. Robert Hermes from Leibniz-IZW, Prof. Dr. Thomas Hildebrandt from Leibniz-IZW and Dr. Susanne Holtze from Leibniz-IZW, photo: Ami Vitale
“The big day finally came on August 22 and we successfully harvested 10 oocytes from the females –five from each – and we were even able to transport them, via the international airport in Nairobi and the airport in Frankfurt, to Milan and to the laboratory in Cremona all within the space of 24 hours.”

I understand the 10 oocytes harvested are a success, that usually the number of eggs collected is lower. Are you happy with that result?

“We were very happy with the number of eggs harvested. Just for the context, when we worked with Southern White Rhino females in European zoos there were females that had zero eggs, on the other hand there was one female who gave us eleven eggs. So I would say the number of eggs harvested is most satisfactory. And especially in view of the fact that these two rhinos had not undergone a health check for the last five years – so it was like looking into a black box to see how much we might be able to collect. What is great is that our colleagues in Cremona managed to fertilize seven out of these ten eggs which is quite a high rate.”

“Yes, for fertilization there is no other way than to use semen taken from male rhinos in the past. One of them is Saud, he died more than ten years ago and the other is Suni who died in October of 2014. So we are using semen from these two males. We chose them because our tests show that they can provide us with the best quality sperm.”

So now you are waiting to see if an embryo develops? How many were successfully fertilized?

Najin and Fatu are the last two northern white rhinos on the planet, photo: Ami Vitale
“Seven out of ten, which is quite a high percentage, and now we have to wait until approximately September 10, to see if embryos develop. We are not there yet – because the main goal of this whole operation is to make embryos, to prove that it is possible to collect eggs from the females, get them to a lab in Europe in time and produce embryos that would then be frozen. Because we also need some time to optimize the procedure for embryo transfers to surrogate mothers. Since these Northern White Rhino females are not cabale of reproduction we will need to find surrogate mothers of Southern White Rhino origin.”

So when you find such a mother and make the transfer –what happens, will she be left to live in a nature reserve or a zoo? I assume you would want the process to be as natural as possible?

“We will definitely work with a number of females. We already know there are some in Ol Pejeta who would be perfect candidates. The only problem with them is that they are wild or almost wild and they would need to be trained. We will also be looking at females in European zoos because they are used to more intensive care, on the other hand, they might not be such prime animals as those in Ol Pejeta. Definitely we will look for a number of suitable animals both in Kenya and in European zoos.”

How long is the pregnancy?

“Pregnancy in rhinos lasts for 16 months, which is a long time, so even if we are successful with the embryo transfer within the next year or year and a half, I think it would still be unrealistic to expect a Northern White Rhino baby to be born earlier than in three or four years’ time.” 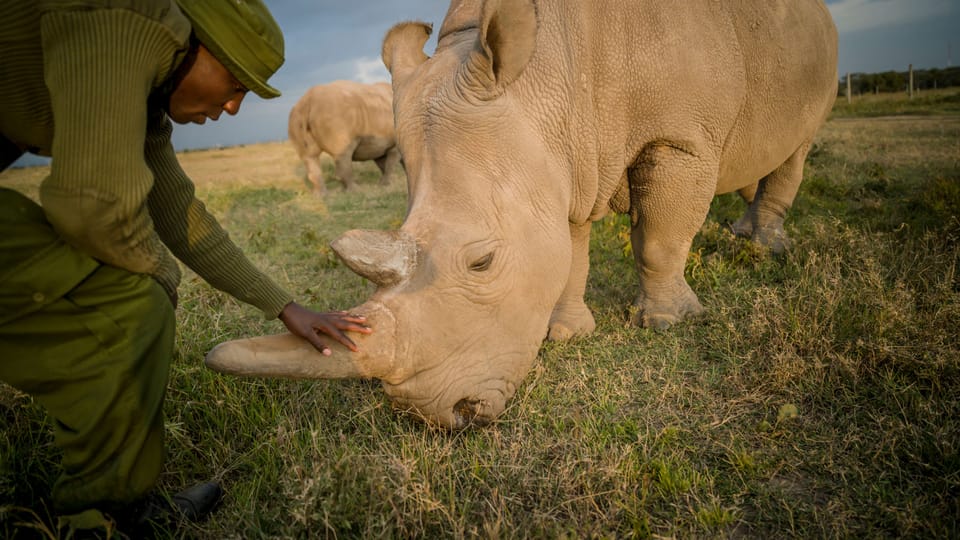 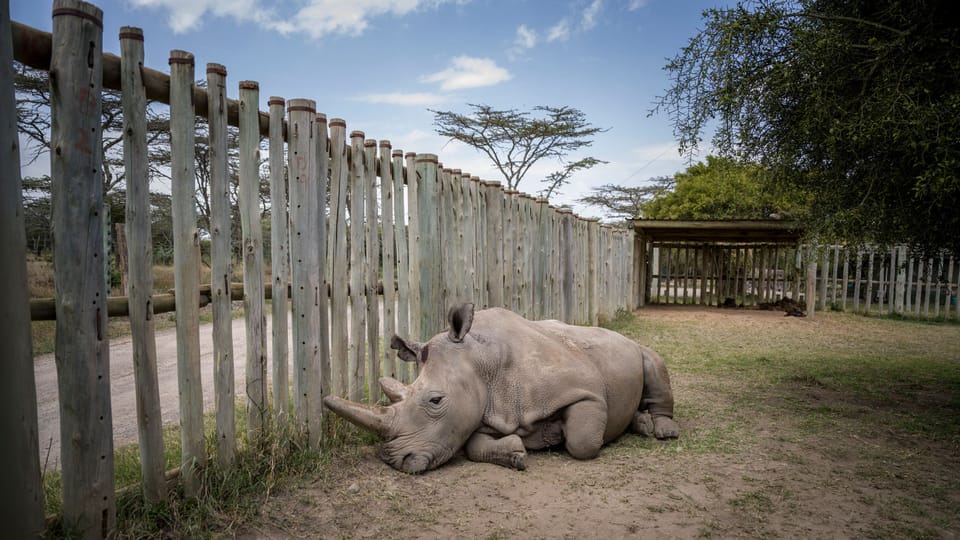 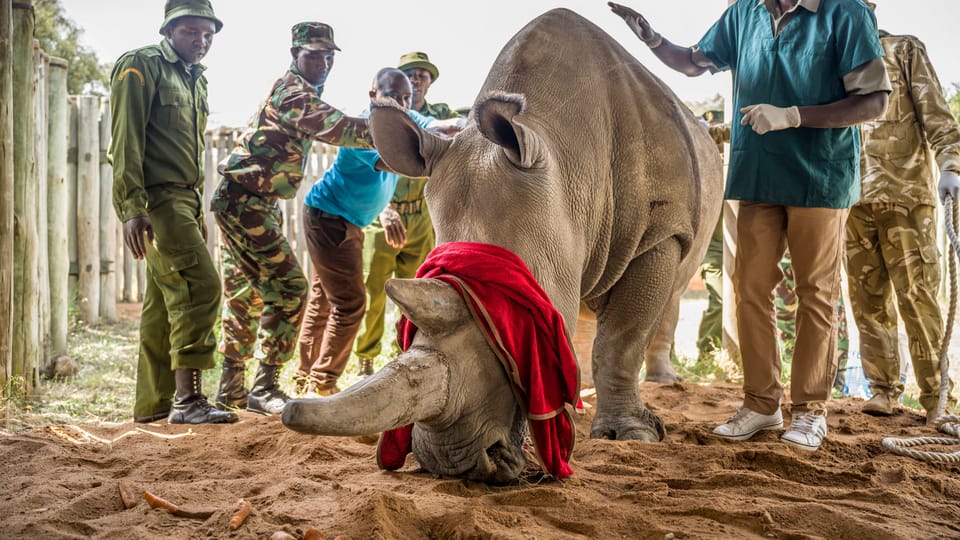 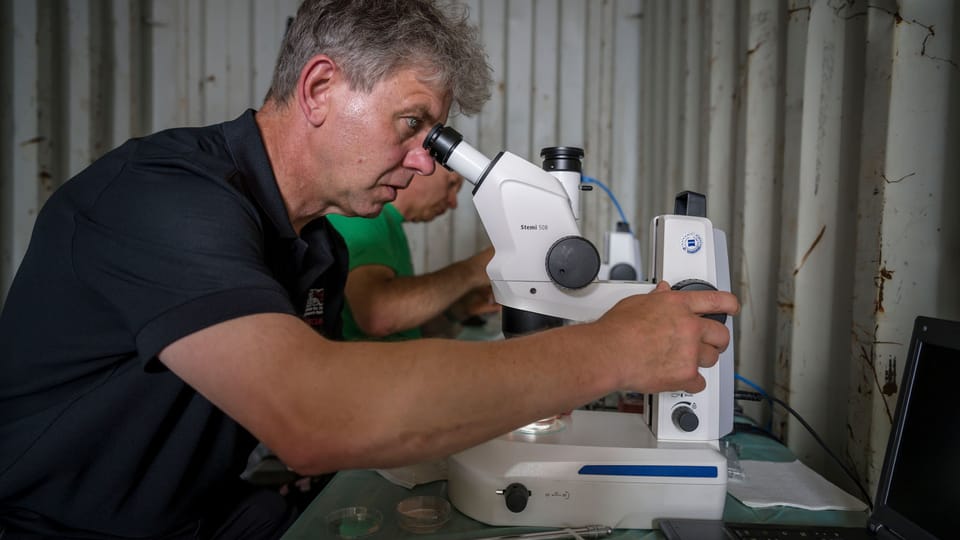 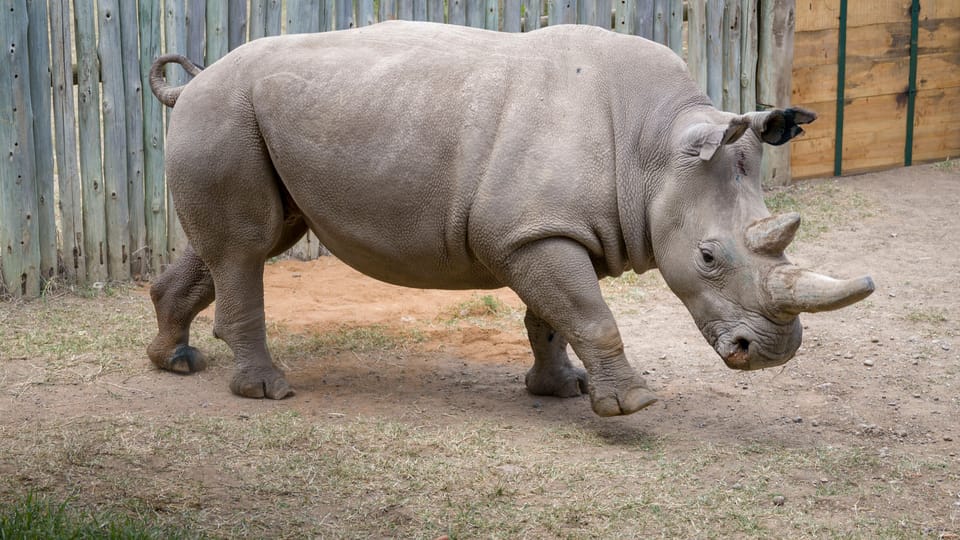 And if it works, how will you proceed? Is not the limited number of specimen a complication in trying to save a breed?

“If you only consider the means we just spoke about, then it would be, because we only have two females and semen from four males, but that is the reason why we are exploring two ways – one – through a collection of eggs and fertilization, the other through stem cell research which we hope will give us the chance to work with other specimens that are already stocked in the laboratory. Altogether with stem cell research we would have 12 specimens and from that point of view I think it is a genetic variability that could support the founding of a new population of Northern White Rhinos.”

But how far is stem cell research in this respect today – can you hope to achieve this?

“Yes, we hope to get eggs and sperm through stem cell research eventually, but it will definitely take a longer time than collecting eggs from living donors. Now we are working on a way that –if we are successful – will give us a rhino baby earlier than through stem cell research, but on the other hand the latter allows us to work with a higher number of specimens, so we need to complement these two ways.”

We are talking about the Northern White Rhino here, that’s a sub-species, but what about the whole breed of rhinos? How threatened are rhinos as such?

Dr. Susanne Holtze from Leibniz-IZW, Prof. Dr. Thomas Hildebrandt from Leibniz-IZW and Prof. Cesare Galli, are searching for oocytes, photo: Ami Vitale
“Officially there are five species of rhinos in the world and I think they are in a huge crisis. We do not know exactly how many Sumatran rhinos and Javan rhinos there are today, but I would say that, together with the Northern White Rhinos, these three types are the most endangered.”

Is this still because of poachers?

“Definitely poachers are still the main threat for rhinos worldwide, so what we need to do is to work on lowering the demand for rhino horns especially in China and Vietnam. Right now there is a CITES conference underway in Geneva and it is surprising that even now they are discussing whether we should open up the trade in rhino horns or not. I think it would be a really bad idea and I hope that not just international trade but even domestic trade in rhino horns will be banned.”

Your efforts get a lot of media attention. Do you reach children? Do you visit schools to talk about the problem of disappearing breeds?

“In Dvůr Kralové Zoo – in our Safari Park - we run environmental education programs visited by around ten thousand kids every year. But what we really need to do is to reach people in the Far East and I was really delighted to see that in June of this year a book highlighting the problem came out for kids in China. It is by a Chinese author, with very nice pictures, and it tells the life story of Sudan, the last Northern White Rhino male on Earth who died last year. It explains that he was saved by being taken from Sudan to Dvůr Kralové Zoo where he lived for about 36 years and then he was brought back to Africa where he died in peace at a quite advanced age in Ol Pejeta. And this story is like a vehicle to inform kids in China that Sudan’s species has been destroyed almost to the point of extinction by the consumption of rhino horns. So I was really delighted to see this ray of hope for rhinos, even in China.”

You specialize in breeding rhinos at Dvůr Králové Zoo – what are your plans? What are your hopes for this breed?

Northern white rhino Head Caregiver, Zachariah Mutai, isolates Fatu and Najin the day of the procedure, photo: Ami Vitale
“Well our nearest plan is to get an embryo of the Northern White Rhino. So we are now very focused on that. And I hope we will know how it turns out in two weeks from now.”

But you breed other rhinos as well…

“That’s true, we breed black rhinos as well. We transported five black rhinos to Rwanda in June of this year. That is a big project in which we are trying to see if rhinos from European zoos can resettle in their original environment from which they were poached. So we are a driving force behind that project and working with colleagues in Rwanda and other European zoos to reintroduce rhinos to Rwanda. Now they are in larger enclosures –about 100 square metres….it is a gradual process and we are only halfway there. So as far as black rhinos go, in the coming months our focus will be on Rwanda.”