The Sykora Bakery, established in 1903 is a valued “Czech” landmark in Cedar Rapids, Iowa. The historic bakery in the heart of Czech Village, has provided the local community with authentic Czech and Moravian delicacies for over a century now. Apart from the regulars who are addicted to its housky and kolache, it has greeted Czech and Slovak presidents with rye bread and salt and hosted President Bill Clinton.

John Rocarek, photo: Klára Stejskalová
Nevertheless, the bakery has seen hard times and is now owned by John and Sue Rocarek who bought it in 2001 to give it a new lease on life. They are both dedicated to keeping the core values and tradition of the place alive. When I visited the bakery a few weeks ago, I was given a tour by John Rocarek who told me what had made a financier acquire a bakery.

“I bake. I’ve owned the bakery for eighteen years, and I enjoy it. The last Sykora that owned the place died in 1994. The Sykora family owned it from 1927 to 1994. They were owners for the longest. So, when I bought it, we kept the name, as everybody knew the Sykora bakery. People knew my name from my finance and banking background. So the last thing that they wanted was to see my name on the bakery.

“We use the original recipes. George Sykora, one of the cousins, he was never part of the ownership, but he was one of the bakers here and he taught me how to bake. So we keep the tradition going. I’m the only person you are ever going to meet who owns a bakery having never wanted to own a bakery. But I wanted to keep it going. It had been on sale for three years when I bought it and I was worried it would end up being a motorcycle shop or something. I wanted to make sure it was safe.

“So, I asked my wife if it was okay to make one of the worst financial decisions of our life. Because I knew that bakeries are not exactly cash-cows, so to say. It is a lot of work and we have yet to make that first dollar that everybody talks about when you build a business and make all this money. We’re still waiting for that.”

How long have you owned it for?

“We’ve had it for eighteen years, but we employ people. We keep the rohlíky coming in. So, as long as you can keep giving the community bábovky, housky, koláčky, zelňáky… How do you say mushroom tarts in Czech? Houbník? Yeah, we make a mean mushroom tart.” 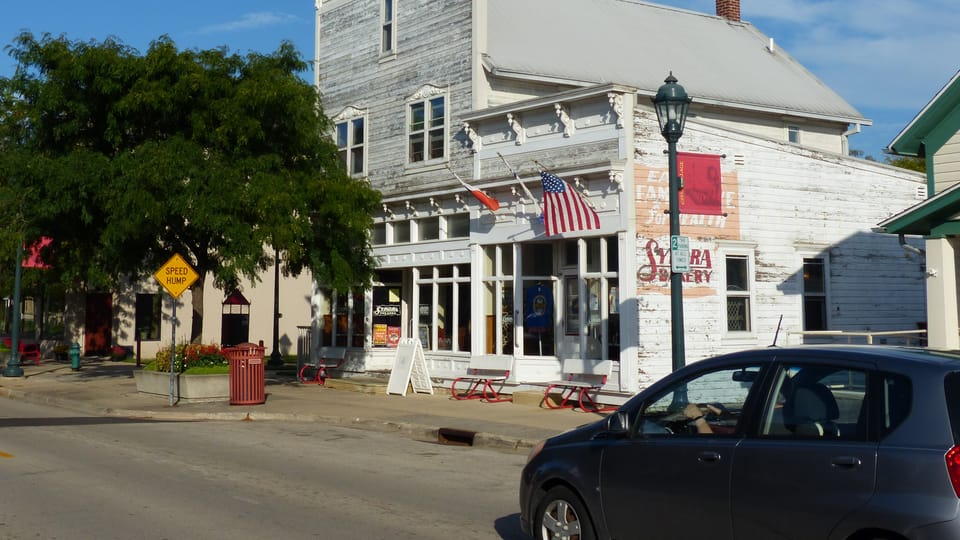 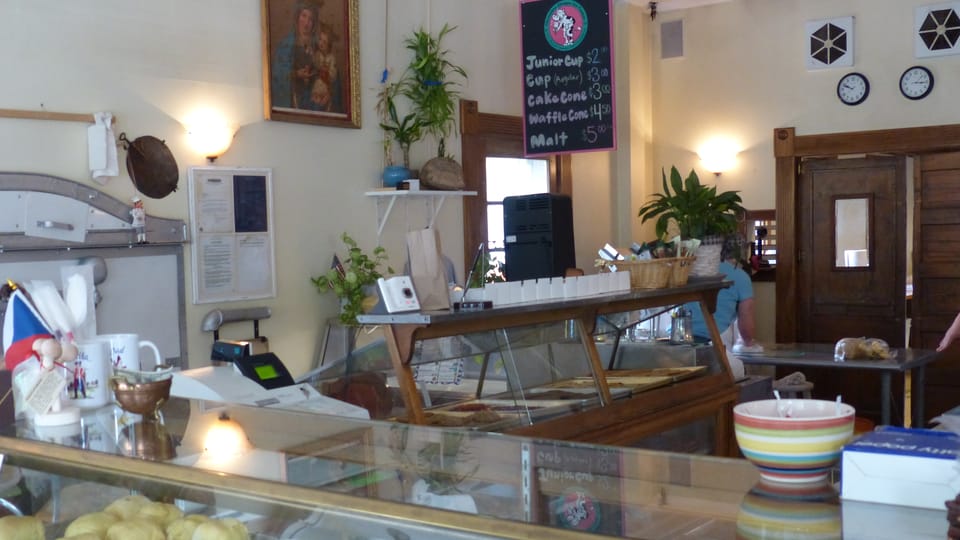 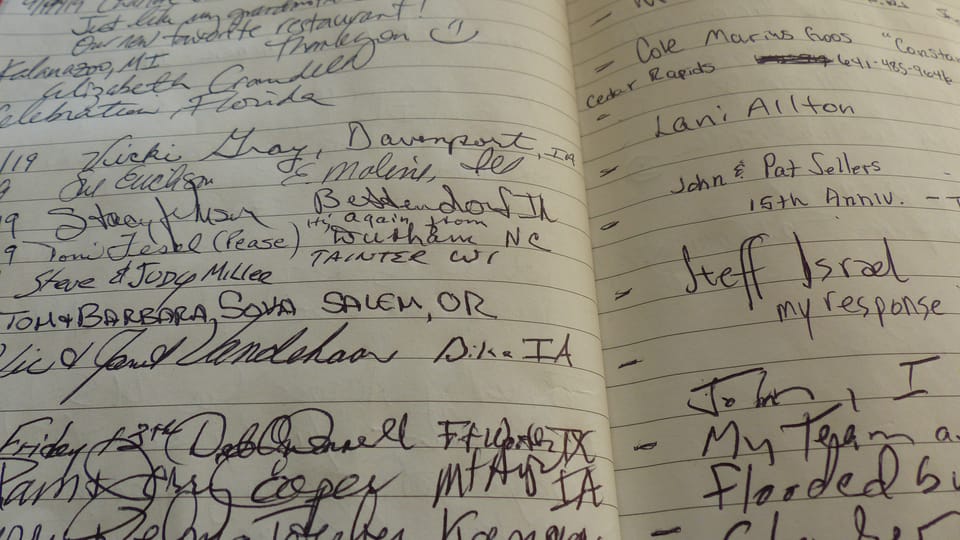 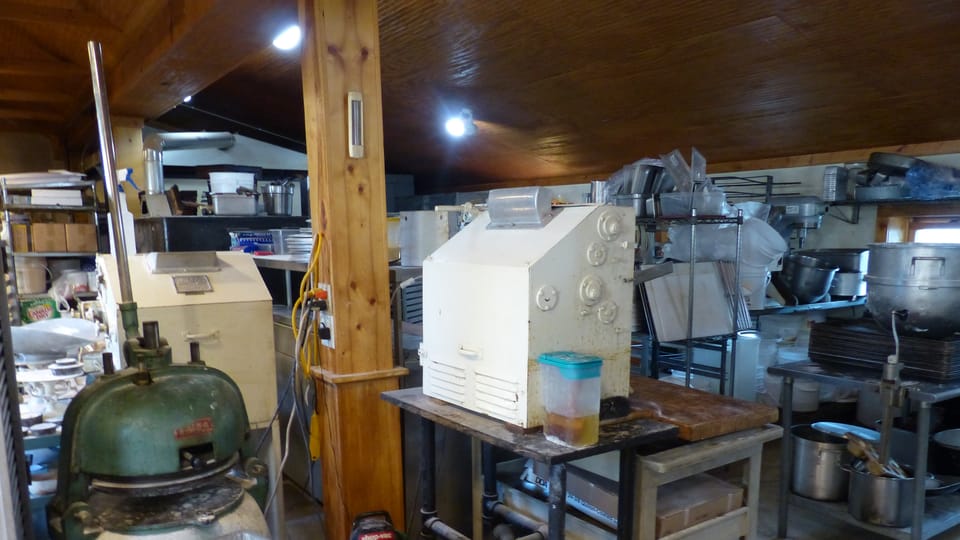 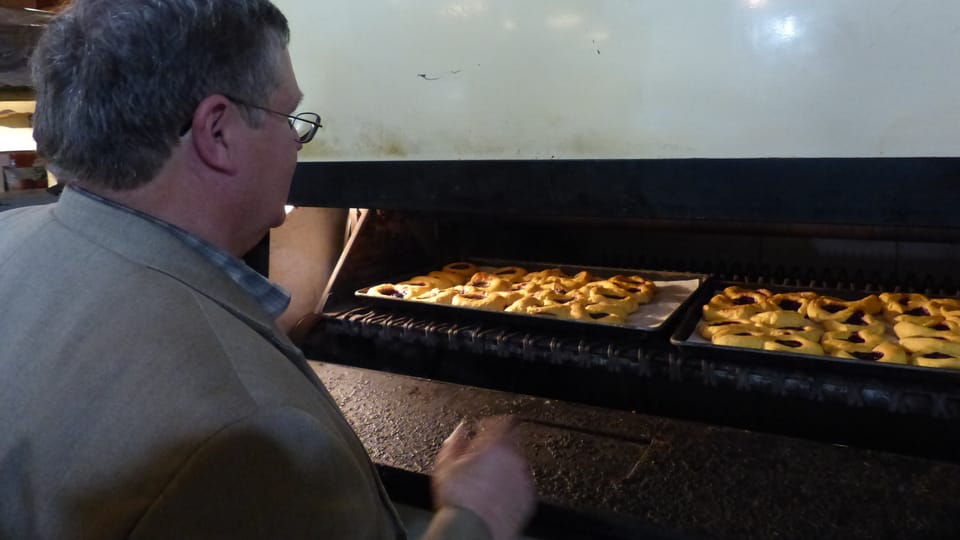 And is it popular with the locals?

“Oh, yes, it’s very popular. Even though in the village itself there are only two or three of us that are Czech. The rest is other businesses and things, which is fine. And I am doing my bit to bring the Czechs back in. There was a company that was down here for many years called Czech Feather and Down and they’ve been in business for 120 years, making goose down feather pillows and comforters. You can also take your old pillows in and they restore and clean them for you. They put new ticking on the feathers and things like that. I mean, I sleep on a pillow in which the feathers are probably 120 years old. You know, we take them every 10 to 20 years to get them cleaned. And that company will actually have their product in our basement. They used to be across the street but then they left, and they haven’t had a presence in the avenue for ten years. So, they’re going to come down and use part of our basement to sell their product and stuff. And it’ll be nice to have them back.

Bill Clinton, photo: Klára Stejskalová
“We used to have a meat market here as well, but we lost that to the flood. It was here since 1927 and we lost it in the flood, in which we had eight and a half feet of water in here. I don’t know if you were told about how much water we had, we had eight and a half feet of water. It was horrible. My wife and I live half a mile from here and we were flooded out of our home too, in June of 2008. The water was all the way up to that picture over there. That picture was painted in oil right on the plaster by one of our customers in 1930, his name was Clint Kalos and he was a house painter. But he was also an artist. In the 1930s, at the height of the depression, when nobody had work or anything, he painted the bakery. In return, they fed his family. They wanted something to remember him by, so he painted a painting on the wall. And during the flood, people would call in from all over the country and ask: “How bad is the flood? Did the painting get ruined?”. They wanted to know if the painting was damaged.”

I heard that President Clinton liked your kolache as well…

“Oh, yes, Clinton was here. It was that morning that I talked about, October 26th of 1995 [The presidents of the Czech Republic, Slovakia, and the United States inaugurated the new building of the the National Czech & Slovak Museum & Library in Cedar Rapids]. He came to the bakery. Now, that was before I owned the bakery, but I had a close association with it. One of the things that presidents Havel and Kováč were most surprised about when they flew in and we met them at the airport was that we gave them rye bread with salt. They were really impressed that we knew about the centuries-old tradition and that we were bringing rye bread with salt to the visiting dignitaries. 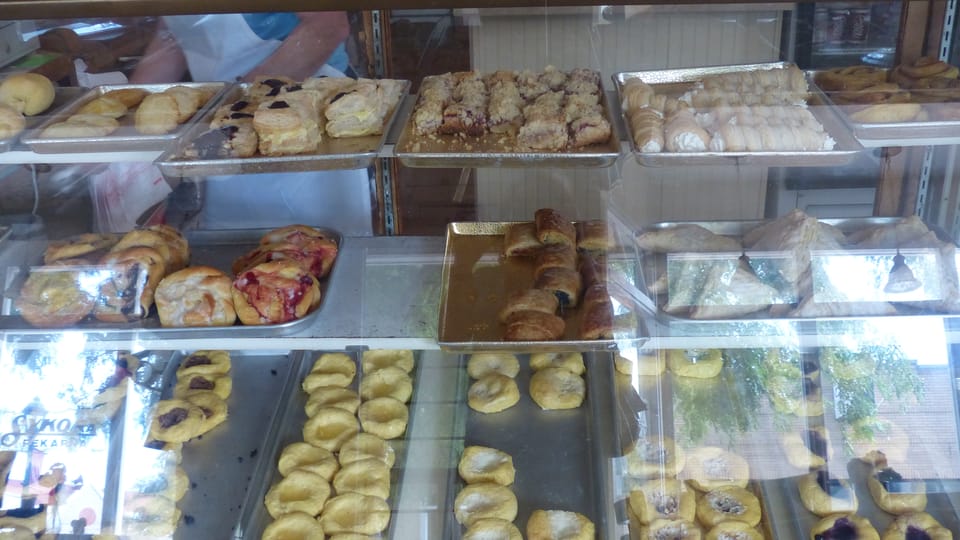 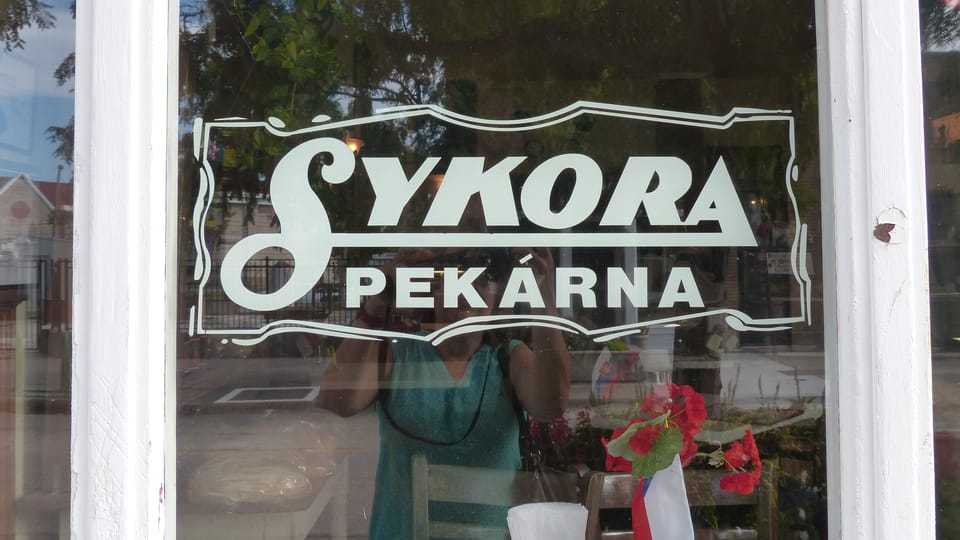 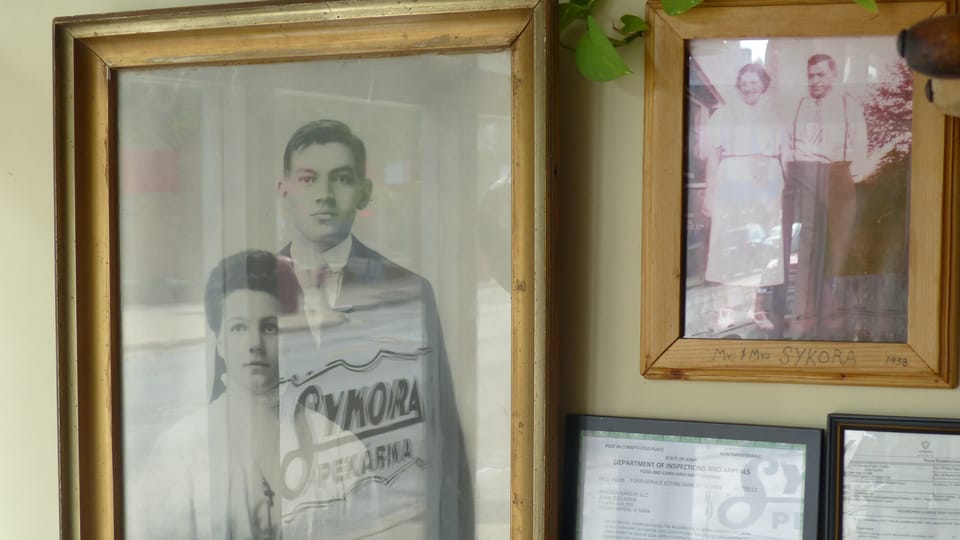 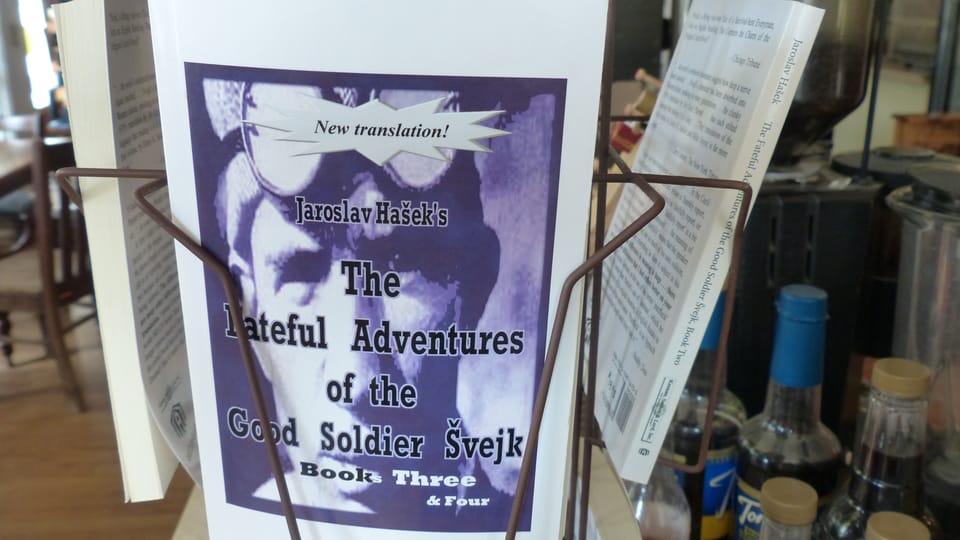 "When President Clinton was here, this is a great story, I got it from the owner of the bakery since I didn’t own it at the time: the motorcade comes around, this is after the event, Clinton sees the bakery sign and says: “We have to stop.” So, they stop, and the owner of the bakery at the time, Dan Janda, he’s standing outside on the corner. So, they lock down the bakery, the president comes in, has a koláč with senator Harkin and his wife Beth – they’re in that picture over there – and spends a few minutes here. President Clinton gets his picture taken with the staff over in that corner and then he leaves. And the owner of the bakery never got a handshake, or a “how are you doing?”, because the security was so tight that he had to see it all from outside. Which was kind of sad (laughs). But that’s the way it goes sometimes.

"And you’re here today! We have a lot of dignitaries at the bakery today. We have people from the Czech Council, people from Radio Prague…”

I see you have meat specialties as well…

Photo: Klára Stejskalová
“We have blood sausages here, we have jelita too. You’d be surprised by how many people order that. I thought nobody would order them. Let me show you the rest of the bakery… ”

So, this part of the building was built in 1900 and there were four additions put on the place over the course of about 80 years.

“And this is our oven, that we use now. It is a 1947 Dispatch Baker Boy, which is the name of the oven. It rattles a little bit, until it gets warm. Oh, and look at that, somebody decided to leave some (koláče) in there. So, you know what we do, we’re good Czechs, we don’t waste anything, we will make bread pudding out of those. We’ll have to have a talk with our baker and find out why he decided to leave them there. They’re already halfway there to bread pudding. (laughs)

“And we have a pizza oven. On Fridays and Saturdays, we bake pizza to get some of the younger crowd in. And then also, if you peak outside here, we built a pergola out here that we are still working on, we almost have it done.

“Look, we’ve planted hops. We have our own hops growing, and then we’re going to bring the wire up above here and there is going to be shade here, provided by the hops that we are going to be brewing our own beer with. We have our own label called Švejk Fest. It is our second year growing the hops now. Hopefully, it will bring more people to come and enjoy the shade.

“What we do is we celebrate Švejk fest – Good Soldier Švejk, right? We have a fest on the Saturday of Labor Day, and I’m telling all of the Czech Republic and Slovakia, that on Švejk fest we have free beer on the patio. So, I’m assuming that next year we’ll have 10 000 Czechs here looking for their free beer. Which would be fine with me (laughs).”

The Sykora Bakery is located at 73 Sixteenth Avenue S.W. Cedar Rapids, Iowa. There are now plans to turn it into a bed and breakfast – giving homesick clients the chance to wake up to the smell of freshly-baked housky and kolache.