The Moravian town of Nové Město is renaming a street on its main square in honour of a Jewish family whose tragic fate featured in the international bestseller Hana’s Suitcase. The tribute comes ahead of the anniversary of the death of the only family member to have survived the Holocaust – who was denied a Czech state honour due to an unrelated political spat.

Jiří Brady, also known as George after immigrating to Canada in 1951, was the only member of his family to have survived the Holocaust. His good friend Jaromír Černý, a former mayor of Nové Město, says he was a wonderful man full of good cheer, despite his eternal grief over the loss of his kid sister, Hana.

“In the time of the Nazi Protectorate – when they were no longer allowed to go to school – he and his sister buried a bottle here in the garden. They put a message in it, about their wishes for how they would like the world to be. About five years ago, he and his daughter dug up the garden, but they didn’t find it.”

The Moravian town of Nové Město is renaming a street on its main square in honour of the Brady family, photo: Daniel Zach, ČRo
After leaving office, Černý, a journalist and researcher who collaborated with Brady for decades, wrote a book chronicling the fate of his town’s Jewish community. In that spirit, the Town Hall decided to rename Vratislav Square (Vratislavovo náměstí) after the Brady family, which lived there above a shop run by George and Hana’s father.

George was 14 and his sister 11 when they were separated from their parents and interned in the Theresienstadt ghetto and concentration camp in Czechoslovakia. Within two years, they were sent to the Auschwitz death camp in Poland.

More than half a century later, a suitcase bearing his sister’s name, a number, and the German word for orphan, “Waisenkind”, made its way to a children’s Holocaust education centre in Japan, and their story told in the 2002 bestseller Hana’s Suitcase.

In an interview with Radio Prague, George recalled what happened to his sister in September 1944.

“They made ten transports to Auschwitz [from Theresienstadt]. I was in the first one, and Hana was in the next to last one. She was looking forward to seeing me. She asked a cousin to fix her hair, so that she'd look pretty when she saw me. When she got there they just cut her hair and then they killed her.” 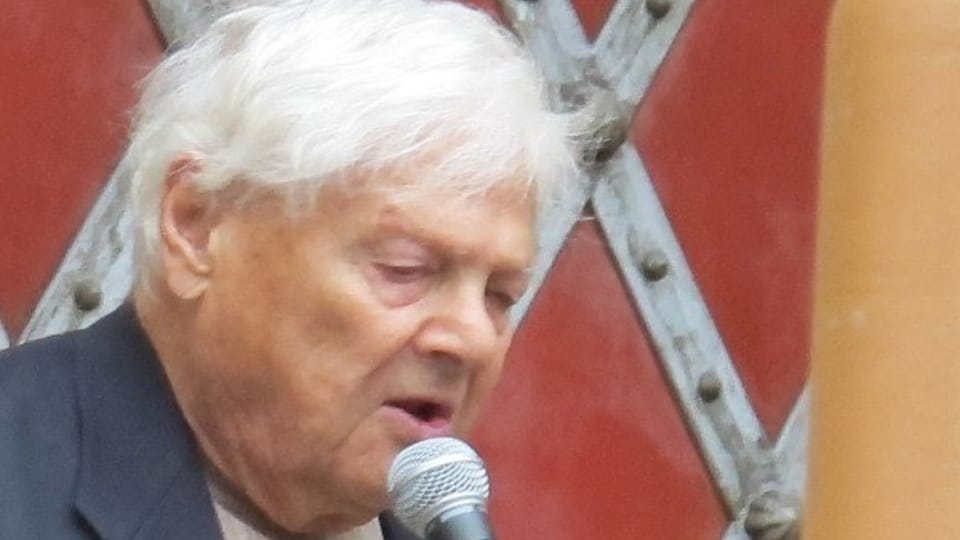 George Brady: A story of tragedy and survival

George escaped while on a prisoner death march in January 1945, a month shy of his seventeenth birthday. He returned to Nové Město after the war but fled the country after the Communist coup in 1948, eventually settling in Canada.

Having promised himself when a prisoner that he would help those in need if he survived the war, he worked for numerous charitable organisations. For his work educating youth about the Holocaust – which intensified after the publication of Hana’s Suitcase – he was awarded the Order of Ontario by and Germany’s Order of Merit, and the Queen Elizabeth II Diamond Jubilee Medal, among other accolades.

But in 2016, President Miloš Zeman denied him a state honour – the Order of Tomáš Garrigue Masaryk – after Brady's relative, the culture minister, met exiled Tibetan spiritual leader the Dalai Lama against the wishes of Zeman, an ardent supporter of China.

George Brady died in Toronto this past January at the age of 90. Only days before his passing, he was still answering letters sent by children from around the world who had been inspired by his sister’s story.