Marta Topferova sings in Spanish despite being born here in the Czech Republic and spending most of her life in the US. Still in her early thirties, she has released several albums over the last decade and has earned an enviable reputation in world music circles; on Wednesday she performed at the opening of the Respect music festival at Prague's Palac Akropolis. I spoke to Marta Topferova just before the show, and began by asking how she had first got into Latin American music.

Marta Töpferova, photo: CTK
"I first heard South American music, from Chile, back home in Czechoslovakia, which was a kind of very lucky coincidence, because my parents got hold of these recordings of a group called Intilimani through some Chilean people who came to live in Czechoslovakia in the '70s.

"Immediately I felt a connection with this music, a very, very strong connection. But it wasn't until I emigrated that I could feed that passion some more, because there wasn't so much international music available, at that time."

When you sing to Spanish native speakers do they hear an accent in your voice? And how do they react to you?

"No, they actually don't hear an accent in my singing. A lot of people guess that maybe one parent is Latin American, and that I'm somehow mixed, or something like that.

"I think in Latin American culture people are very proud of their music, but in a way where they want to share. They embrace you, they want you to learn their language - it's more of a triumph when other people participate in the music, as opposed to 'this is mine and I don't want other people to get involved'. That's been my experience at least.

"Although in Spain it's different. Among the flamenco musicians there's definitely a certain hierarchy - it's much more difficult to penetrate that circle." 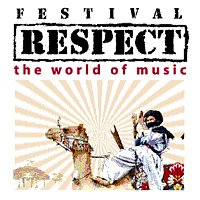 You're playing at the opening of the Respect music festival, which I guess you'd categorise as world music, though I know some people don't like that title. Do you think Czech audiences have become more used to world music? Is it more popular here now, from your perspective?

"I do think so, from what I see in terms of festivals, and when I walk into record stores there's a lot more international music available than years ago. But I don't live here, I'm here six days out of the year, sometimes - I don't feel like I know the...circle.

"Actually being here I do want to make more connections with for example Czech musicians. It's happening little by little as I'm coming here to perform a little bit more.

"Last year we shared the stage with a wonderful group from Moravia called Javorina. So, yeah, little by little I'm penetrating the scene a bit more."