Welcome to Czech Books - and to Czech slam! Slam poetry first came into being in the United States in the 1980s and is basically a competition between performance poets, who perform their work in front of an audience who then decide who they think did the best job. Slam poetry has become very popular in the Czech Republic in the past few years, with regional competitions in many towns such as Plzeň, the hometown of my guest today, one of the leading Czech slammers - Bohdan Bláhovec. Bohdan is a 23-year-old student at the Prague Film School and a two-time prize winner in the Czech national Slam competition. I asked him how he first got involved in Slam.

“It really accidentally happened; it wasn’t really planned; it wasn’t like my childhood dream. My way to Slam is a bit funny because the first motivation to try to be part of a Slam competition was really a question of money. A friend from Plzeň told me, “Hey Bohdan!, next Wednesday there’s a Slam poetry competition, won’t you take part in it? There are 1,000 Czech crowns as a prize”. And I looked in my empty wallet and I said, OK, there is no other way. So I tried it and I won that 1,000 crowns and, in the absurd end, I won 30,000 crowns in the Czech final.”

It did start you on a journey into Slam poetry, which is maybe something that you’re still very sceptical about, even though you’ve become a spokesperson for Slam poetry and you travel abroad to represent the Czech Republic in Berlin, for example, and in May you’re going to Warsaw. So what are your feelings about the whole phenomenon of Slam?

“It’s changing. When I first took part I was a bit sceptical because for me the combination of show and poetry and competition – I’ve often said, “Slam, it’s a ‘strange poetic reality show’”, with a little bit of irony. That was a reason I was a bit sceptical, because I said, how can we find something poetic in this fighting atmosphere and in this Pop Idol principle? I wanted to be a little bit ironical about this strange principle, that we’re looking for poets - the same principle is all around me in this money, capitalistic atmosphere - that we’re looking for dancers, we’re looking for singers, we’re looking for poets - but we don’t want them, we need winners. And this is the same in Slam poetry, that, OK, we need a poet, we need poetry, we need something new and fresh, but just the one, the one who’s the winner. I had a feeling that, when the only arbiter of the quality or meaning of your poetry is the audience, it could be very easily just prostitution.

“When I first took part in a Slam competition I really did it in this populist way, I made my performance just based on a lot of paraphrases of classic Czech poetry and my refrain was, “For 30,000 I do this and that, blah, blah, blah, and I wanted to put a little bit of irony into that. OK, I’m here, I’m just recycling, not coming with anything new. And you want to give me 30,000 for this?” And yes, people said, “yes, we want to give you 30,000 for this”. And in this first moment I didn’t know whether to be happy or sad. That was the sceptical moment, But, I won that competition and since that time I’ve been invited here, there and everywhere. And I got much deeper into Slam and into the Slam context all around, not just in the Czech Republic, and I really started to like it.

“I said absurd, and what was absurd was that I got a media reputation as a pioneer of Czech Slam poetry and I started making interviews and describing what Slam is, what Slam could be, and I became something of a theoretician of the young Czech, pre-natal, Slam poetry scene."

What was your experience when you went to Berlin, for example, and you encountered other performers there?

“In a general way I was surprised that there existed something like a professional Slam poetry scene. I met a lot of people and when they gave me their visit cards, as a profession there was written ‘Poetry Slammer’. It seems to me very funny. I think there is a different climate in the Czech Republic. What is very positive about Czech Slam is that nobody yet knows what it really is. Across the borders there is a very clear idea of what Slam is and I think it’s very good about Czech Slam that it’s still in the moment of looking. The number of interesting performers is growing, and, what I like - and dislike, is that everybody is completely different. Someone takes it more as an “author’s” reading, someone takes it more like theatre, someone else just improvises, just rhymes on impressions. I think what has changed since I first took part is that people are not looking so much to the audience as the sole important thing, they are starting to think more about the meaning of their words.”

You are very much an improviser and play with words very, very creatively. Do you think that the Czech language lends itself particularly to the kind of improvisation and creative work you do with the language?

“Definitely for me because I know that my brain is configured to language; that language is the Czech language and it’s just one instrument that I can use to express everything I want to. The Czech language determines me, and I have nothing else. I want to say something, I see something, but I can describe it only through language. I think Czech is very open and very creative. For example, I love it that you can say some word, then you see a different word living in the word before it and together they make some contextual meaning.” 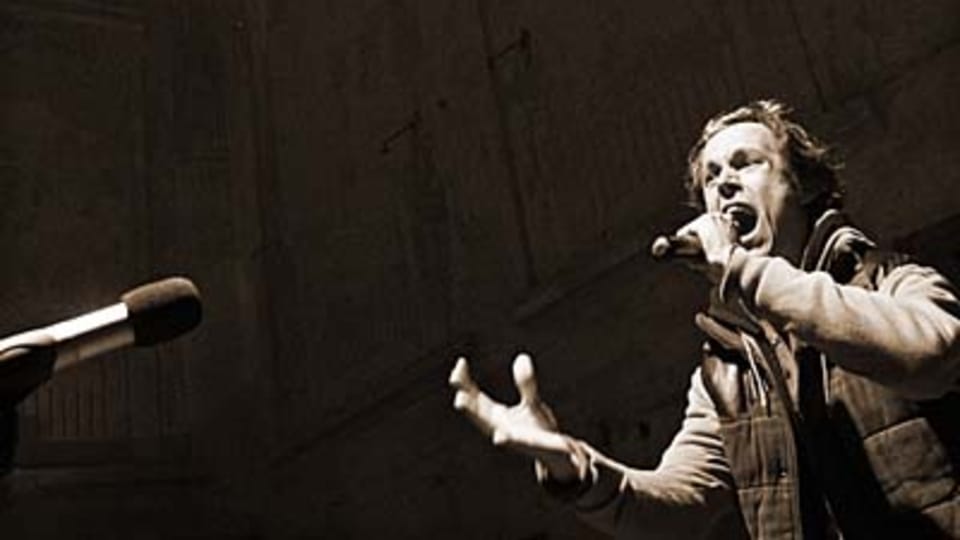 Can you give me an example?

“For example, in Czech the word for ‘art’ is ‘umění’ and if you cut the whole word there is something like ‘u mě’, that means it’s very close to me, and you also find the word “mění” which means ‘it changes’. And I think this is really the meaning of art, that it is something that is close to you, and, if it’s right, it could change something. And this is the nice language play in the Czech language, and it’s just there; I’m not the author of it, every Czech person could find it.”

You did, when you were performing in Berlin, experiment and play with other languages, I think German and English.

Bohdan Bláhovec
“I don’t just want to be that Slam poetry guy who is the most funny, in a populist way. I wanted to find some sense in Slam. And the sense was that I always have to have a topic when going on stage, which is important for me. I try to say something - it may sound a bit pathetic - but I want to have some meaning, some message. And in Berlin there was a nice idea, to talk about the Czech-German relationship because it’s still a very deep, living sort of a problem; but it’s not my problem, it’s a problem of my ancestors, though it’s still something in my genomes. And I can’t speak German, but, as with all Czech people, in my genomes there’s a little bit of German because of history (and blah, blah, blah) and I realized I knew some words like “Ich bin”, “I am”, “Já jsem”, and I made this language ping-pong based on the principle, Ich bin, Já jsem, I am, and I used these three languages, and it works.”

The way that you connect words, I’m reminded of the influence also of Surrealism.

“Yes, that’s it. I think there is nothing new in the thing I’m doing. It’s maybe the same thing, that we need a ‘show’ to propagate poetry. Because, to be honest, everything has already been done. In art, in music, culture. Now we just need a commercial to get into our brains the feeling that we have to make that circulation of money. But I think poetry is done.”

But there is something new about the great popularity, particularly amongst young people, of going out to music clubs, theatres and cinemas to listen to poets perform and also to enjoy this competition of Slam.

“The most important thing is the contact and, because of the contact, the context. If you transcribe some Slam show text onto paper, or if you record it, it’s much more ‘surface’ than it was in the moment it happened. And I think we just all need to meet, to feel the atmosphere in context. And I still think that if something poetic happens during Slam poetry it’s always based on the symbiotic moment between the audience and performer. And in that pressure between them there is something unique. But it’s just a question of moment, it just happens; then it’s over.”

So you haven’t been tempted to transcribe your own work or experiment with the word on the page?

“It’s difficult for me, because for me there are a lot of borders. The first border is the border when you translate the idea to the way of your mind, and then you start to formulate the words, and then you have to say it. It’s like three borders in one moment. If you have a pencil and paper you don’t have to say it but you have to write it, and your hand is too slow to write it down. Maybe for me it’s just an excuse, but I’m still not as sure as possible that my words have enough deep and important meaning and sense to conserve them.”

So, until you maybe have that sense, people just have to find the opportunity to actually enjoy the moments with you. In fact, for anybody who is in the Czech Republic next week, in Plzeň there’s a chance to hear you and others perform?

“Yes, there will be a performance of the five best-known Czech slammers, in the Moving Station, which is a site-specific cultural project that transformed an old railway station into a cultural centre. So, on 29th April, at 8 o’clock in Plzeň.”