The beauty of a scarecrow

Rudolf Smid is a photographer, but you won't see him round any fashion models. He specializes in scarecrows and he's willing to walk miles for a new discovery. After eleven years of tramping around the country he has collected enough stunning photographs to show the public a world of mystical beings that have lived in our midst for generations.

Rudolf says they are not only beautiful, they have souls. And he remembers clearly the first time he snapped one:

"The first time I took a picture of one was in 1994 -I remember that precisely, because it was a moment of revelation. I suddenly realized that this was a world of mystical beings who were largely ignored. So I launched a kind of photo-social study of this phenomenon and when I focussed on them their world opened up to me. Scarecrows may not be living things, but they seem to have souls and they all have life-stories. There were two who were always together - the Lovers, I called them - then someone separated them - but in time they got thrown back together again, when they were no longer of any use. If you study them patiently you will find many parallels with real life - love, loneliness, happiness, death."

An exhibition of Rudolf Smid's scarecrows is now open at the Louvre Gallery in Prague -where you can also buy postcards of any that capture your imagination. His two abandoned Lovers are there of course, you'll also find The Apostles, Judas and Jesus, the Oriental beauty Shahrazad, The Indian Girls, A visitor from planet Mars and of course many, many more.

Rudolf's travels in search of scarecrows have taken him to many forgotten and out of the way spots and he jokes about how sometimes different regions have their own brand of scarecrows. For instance in wine growing areas you often find a beautiful girl or a hangman. The first, Rudolf says -is made while they are merry with good wine, the latter when they wake up with a hangover. One thing the photographer insists on is that his scarecrows be natural.

"There's a village in the Sedlcany region that I loved to go to. You'd always find about twenty scarecrows within reach. But I have a feeling that the locals have found out about me and have started vying for my attention. Suddenly the scarecrows have got better and fancier. But I don't want that. I need my scarecrows to be authentic."

The exhibition of photographs is open at the Louvre Gallery on Prague's Narodni Trida until September 3rd. 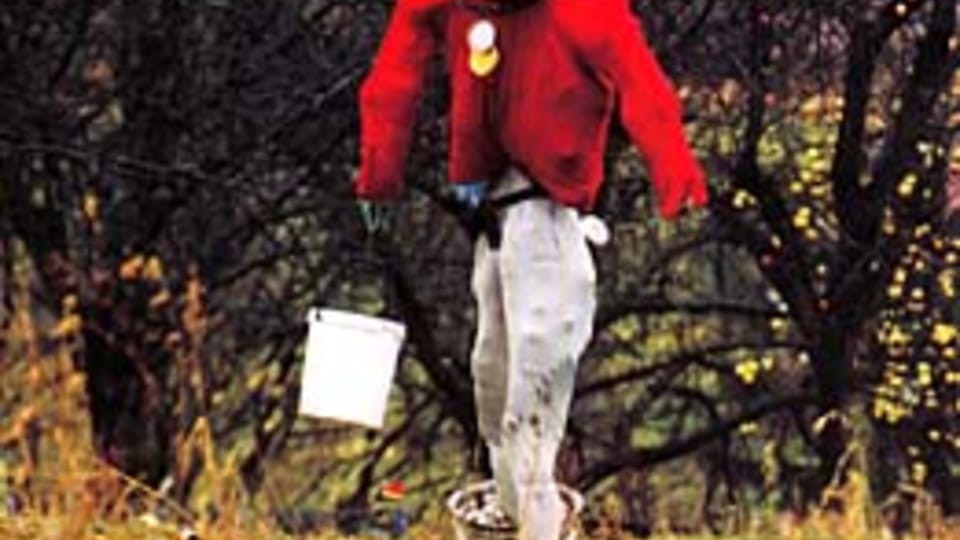