A visit to Nepomuk, birthplace of a famous Czech saint

A visit to Nepomuk, birthplace of a famous Czech saint

Monday marks the 300th anniversary of the beatification of St. John of Nepomuk, a court priest who died a martyr’s death after invoking the wrath of King Wenceslas IV. To mark the occasion, Radio Prague International paid a visit to the birthplace of the famous Czech Saint, a small town of Nepomuk in south-west Bohemia.

John of Nepomuk, the patron saint of Bohemia, is revered among the Catholic faithful as a protector from floods and drowning. Legend has it that King Wenceslas IV had him tortured, killed and eventually thrown into the Vltava River because he refused to reveal the confessional secrets of the king’s wife Žofie.

The real reason behind the death of Jan Nepomucký was most likely a clash between secular and religious authorities. Historical evidence suggests that King Wenceslas IV had the court priest killed for siding with Rome in a political dispute over who would become the next Abbot of Kladruby. Nevertheless, John of Nepomuk is still considered the first martyr of the Seal of the Confessional, a patron against calumnies.

The famous Czech saint was born around the year 1340 in the town of Nepomuk in south-west Bohemia, where he spent most of his childhood. In his lifetime, the town was called Pomuk and was only renamed to Nepomuk later. However, despite the similarity, the name has no connection to the famous Saint.

The town of Nepomuk lies some thirty-five kilometres from Pilsen, on the edge of the Brdy protected natural area. It is surrounded by a picturesque landscape dominated by the Zelená Hora Hill, with a chateau of the same name standing on top of it. Today, Nepomuk is not only a pilgrimage town, but also a popular tourist destination.

Apart from the Zelená Hora Chateau, there is also a Museum of Saint John of Nepomuk and the Municipal Museum and Gallery. But perhaps the most important sights are two churches linked to the famous Czech saint.

“In the front part of the church, you can see the central altar, with a life-size statue of Saint John of Nepomuk. Legend has it that it was built where Saint John’s crib used to stand. That’s why it’s called Saint John’s Crib.”

In 1734, the original church gave way to a new, Baroque structure designed by the famous architect and builder Kilián Ignáz Diezenthofer. To this day, a mass is celebrated here every year to mark the anniversary of the birth and martyrdom of St. John of Nepomuk. Štěpánka Kodýdková again:

“There are four interesting paintings in the church with the most significant events of St. John’s life. The first pictures his birth, the second depicts him listening to the confession of Queen Sophie, the third shows him being tortured and the fourth shows how he was thrown into the Vltava River.”

We should also add that a mass celebrating the 300th anniversary of St. John of Nepomuk’s beatification is due to take place in the church on Monday evening.

Another church in the town of Nepomuk directly linked to the famous Czech Saint is the Church of Saint James the Greater, where John of Nepomuk was christened.

Originally a Romanesque church founded by the monks of the Cistercian Monastery in the 12th century, it was rebuilt in the Gothic style during the 13th and 14th century.

“During the 14th century, the church served its purpose, but in the 18th century, due to reforms carried out by Emperor Joseph II, it was deconsecrated. It became the property of the town and was turned into a granary.

“It was only in 1860, thanks to donors from the nearby Chateau of Zelená Hora, that the church was newly furnished. The furniture, the altar, and also the stained-glass windows all come from that time.

“I would also like to point out the ceiling. There was a fire in the church in the 1950s, and restoration work revealed 400-year-old frescoes on the ceiling. They depict some of the famous Czech patrons, including St Wenceslas, Saint Martin and Saint Jacob the Greater, and also the Holy Trinity.”

Processional statue of Saint John|Photo: Klára Stejskalová, Radio Prague International
In addition to religious services the church also serves for concerts and events linked to the famous Czech saint. One of the attractions is a statue of the saint, says Mr Kodýdková.

“It is a processional statue of Saint John. It is used for pilgrimages and processions, and we carry it every year to the Navalis celebrations in Prague. The statue is adorned with flowers and carried on a special stretcher.”

To mark the third centenary of St. John of Nepomuk’s beatification, Radio Prague International called on its listeners around the world to send their photographs of churches and monuments dedicated to the saint.

We have received close to a thousand beautiful photos from all parts of the world and you can see a selection of the best below. 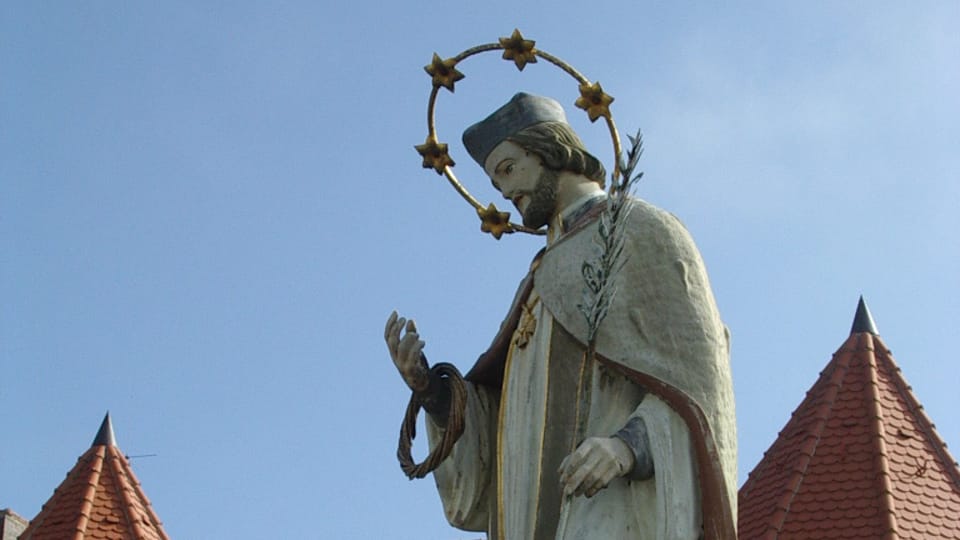 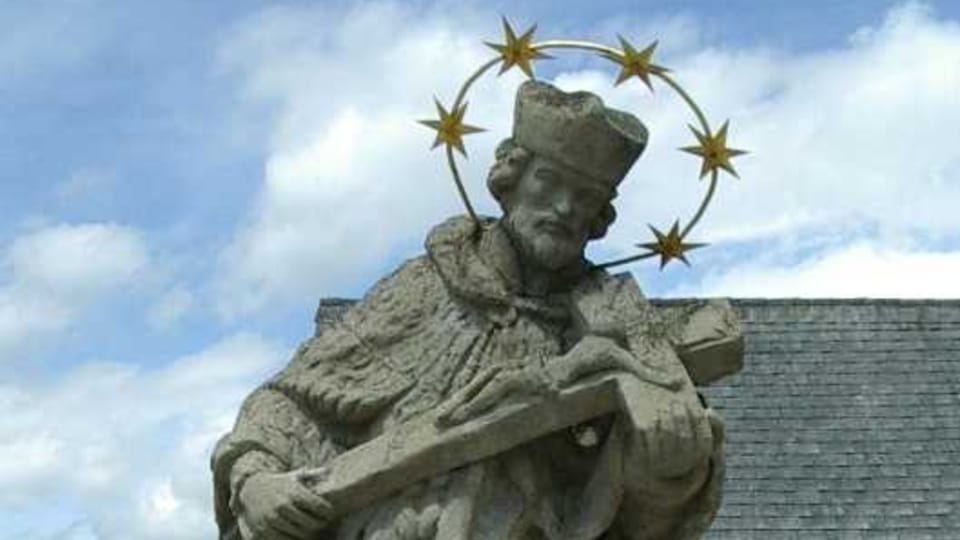 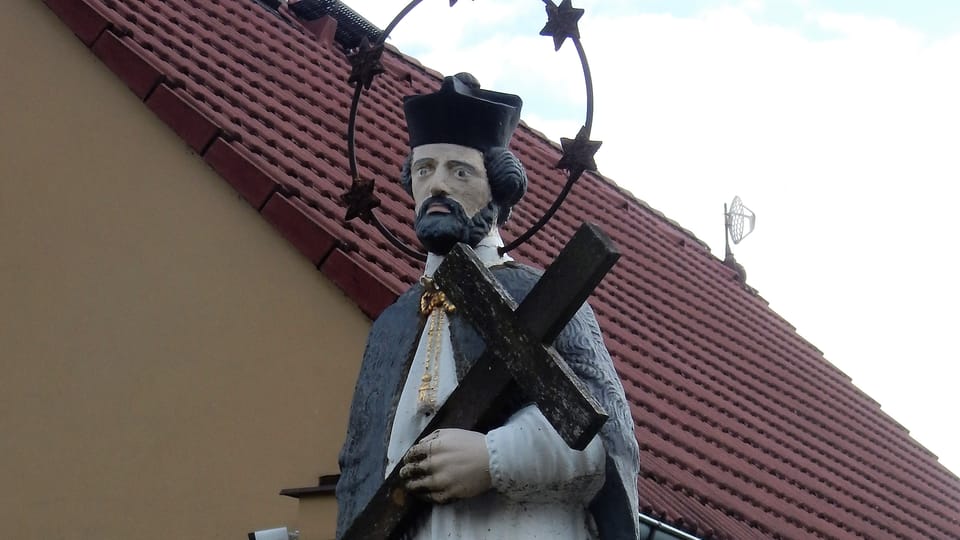 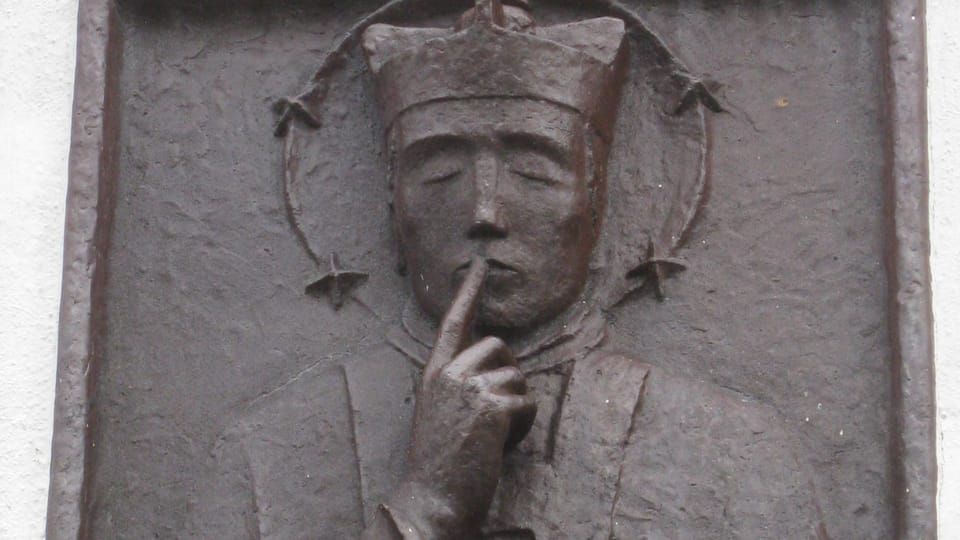 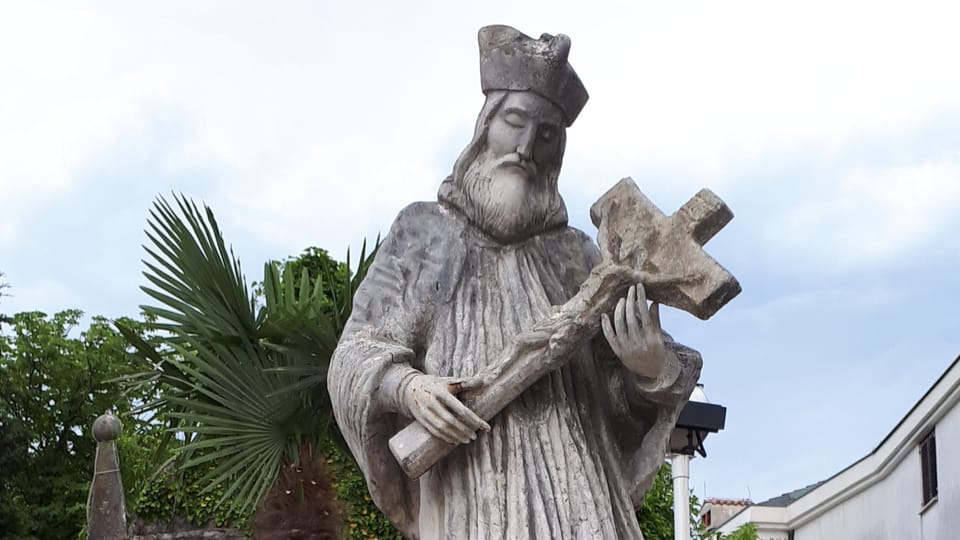 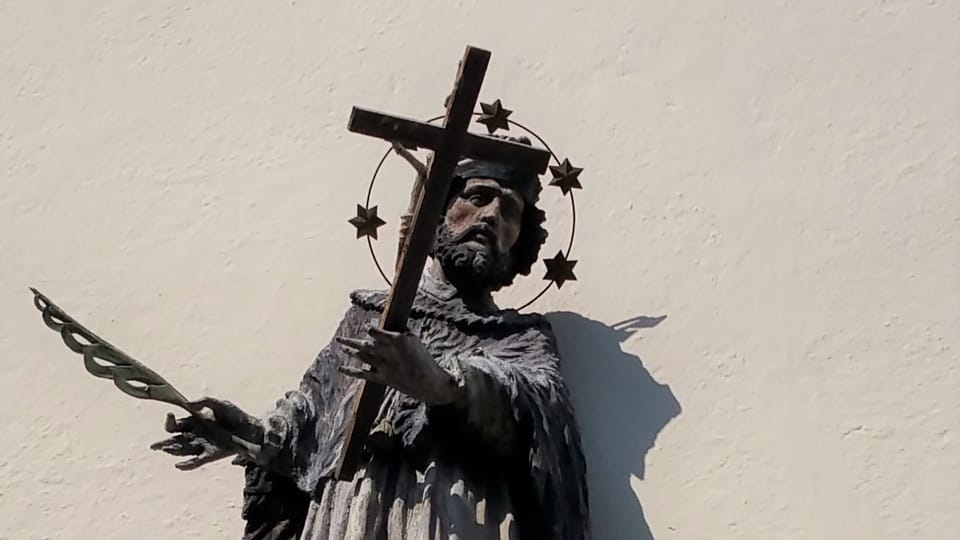