A visit to Chernobyl’s ghost town of Pripyat

A visit to Chernobyl’s ghost town of Pripyat

Two adventure-loving Czech bikers are fulfilling their dream of discovering the world on their Jawa motorbikes. Michal Franc and Martin Gregor have covered 35 thousand km across Europe and this year they headed for the ghost town of Pripyat in Chernobyl, the site of the worst nuclear accident in history. On their return they paid a visit to Czech Radio to talk about their experiences.

Michal and Martin are crazy about their bikes – the Jawa 50 Mustang and the Jawa 21, 50 year-old-veterans, which have taken them around Europe. They know how to fix them but always carry a spare engine, just in case. So far they’ve not let them down and the boys say that the older they get the more reliable they are. This year their destination was the ghost town of Pripyat, in Chernobyl, the site of the worst nuclear accident in history. Michal says they had no trouble agreeing on this particular destination.

Photo: Michal Franc
“Chernobyl is a place we both wanted to see for ourselves. We had heard so much about the Chernobyl disaster and seen all these horrific documentaries; we were both curious to see what it looks like today. You hear so many stories about how dangerous it is to visit and how the place is still radioactive, but that is not true of the whole place and we were able to measure the level of radioactivity for ourselves. Everyone entering the Chernobyl zone is given a dosimeter with which you measure the degree of radioactivity. In some places it is similar to what you would register here in the Czech Republic, but there are other areas, so-called “hotspots”, where you are not allowed to even stop because they are really still life-threatening. Those are for instance, the Red Forest near the power plant or the abandoned hospital grounds where you can still see the suits of the first firemen who arrived at the site of the accident.”

The Chernobyl zone, which has become a big tourist attraction in recent years, is an area of some thirty kilometres in diameter divided into three zones. The inner ring which is about ten kilometres in diameter is at the very centre of the 1986 tragedy. This is where the Chernobyl plant is located and the nearby town of Pripyat which had 47 thousand inhabitants before the accident. Now it is a ghost town bearing testimony of the enormity of the disaster from which thousands of men, women and children fled, leaving everything behind. Martin says the experience is overpowering. 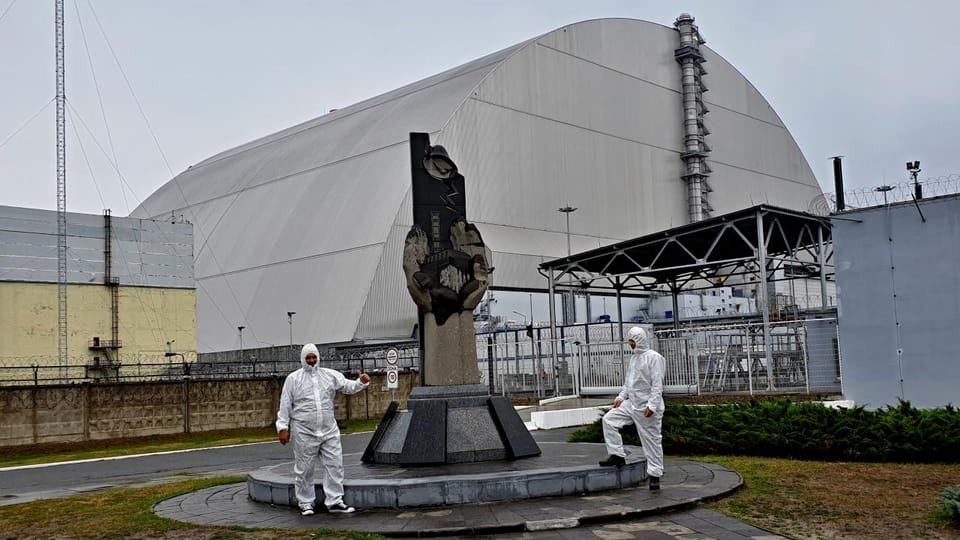 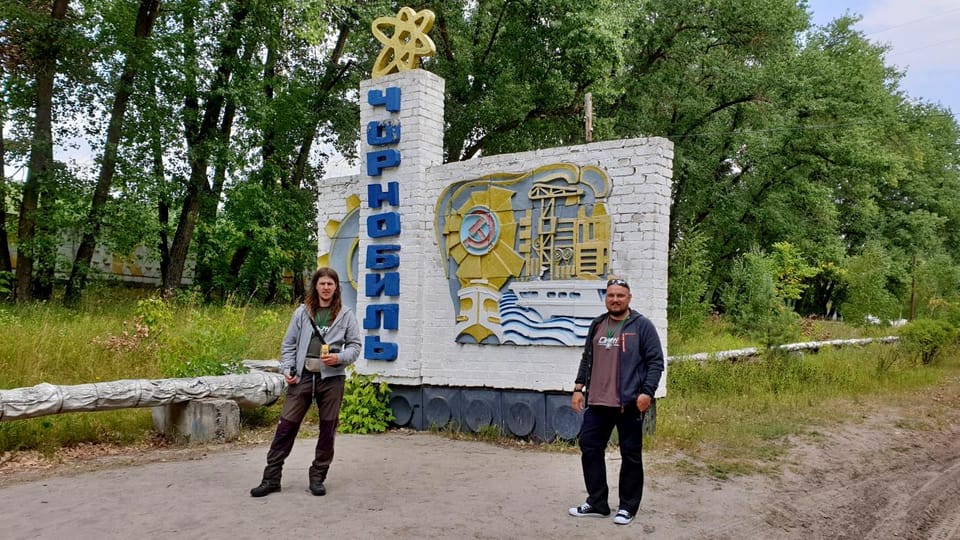 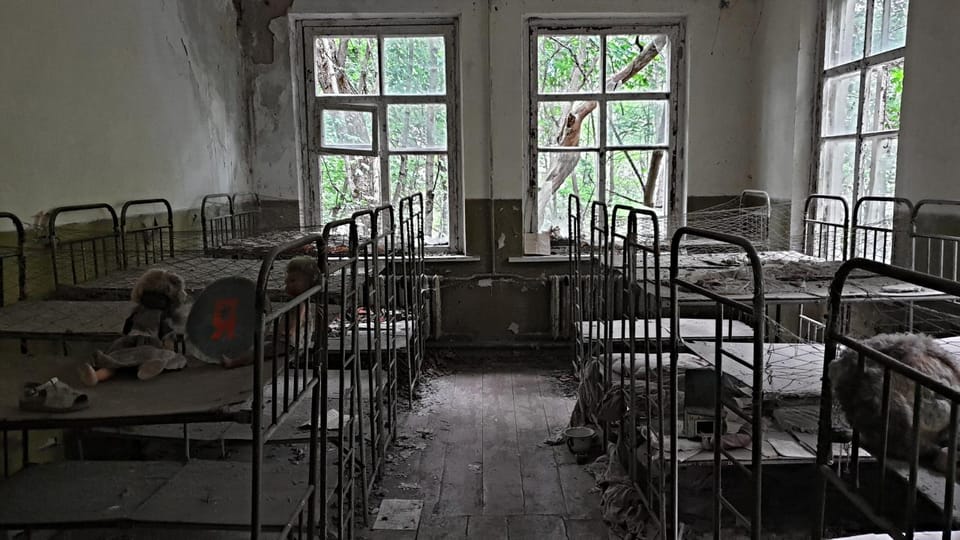 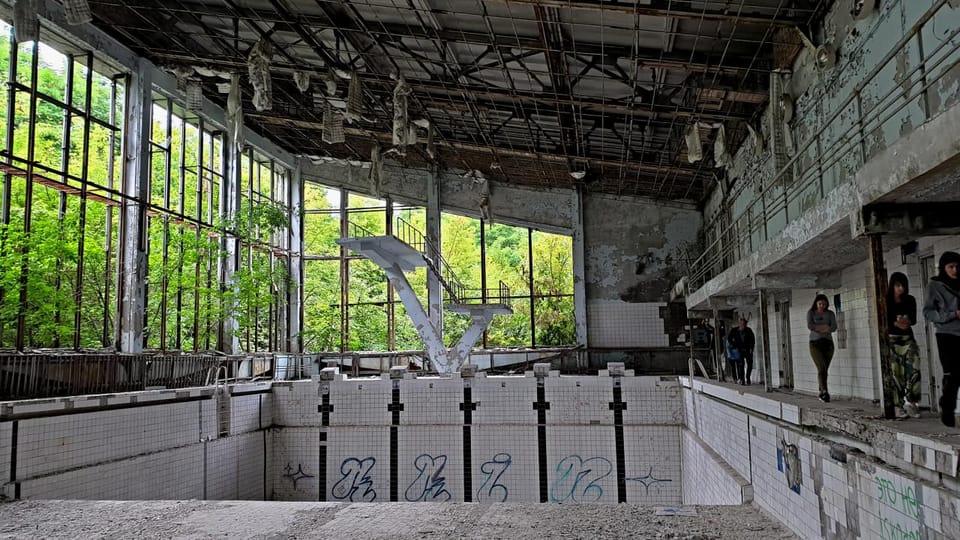 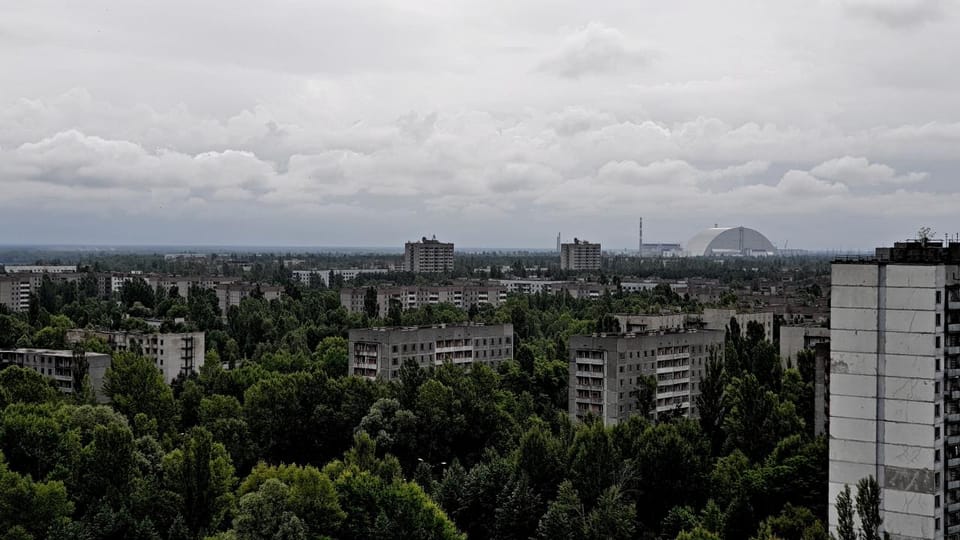 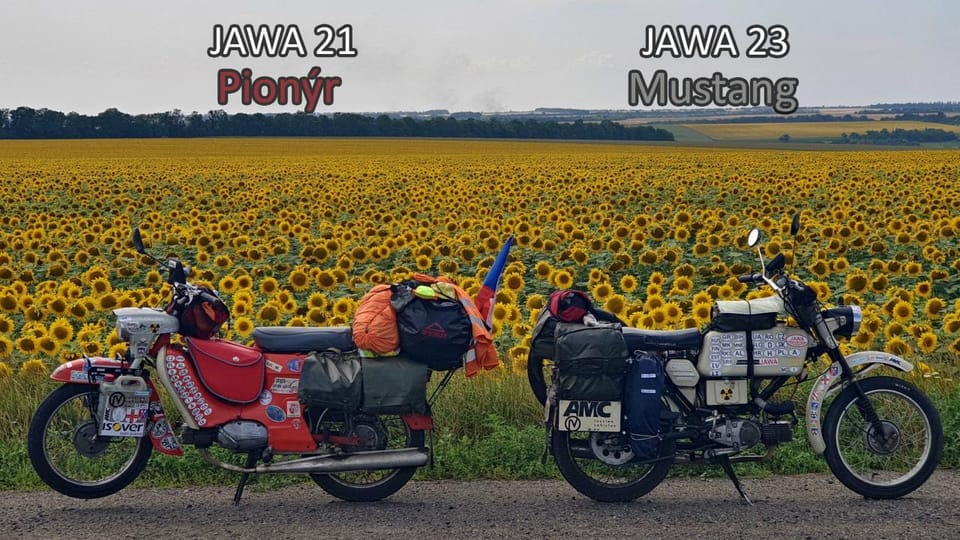 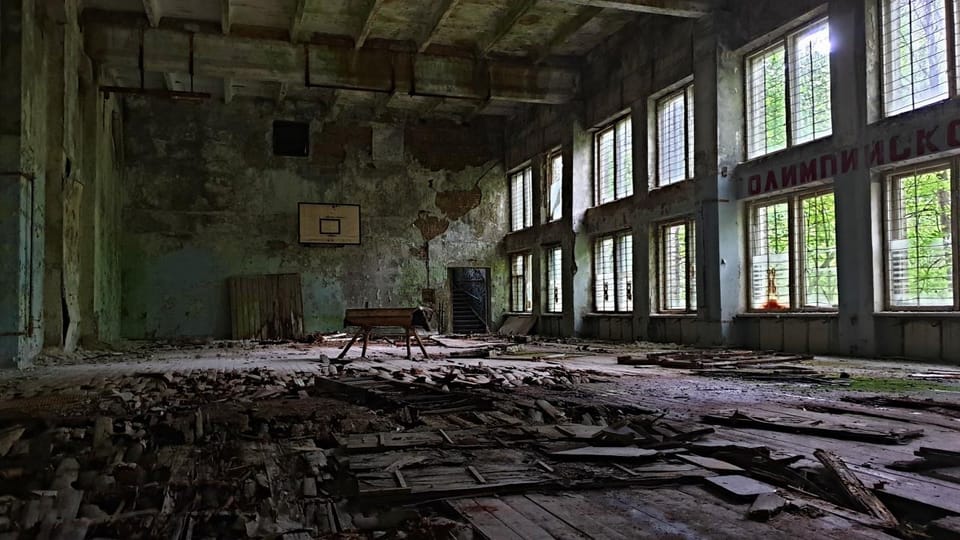 “You are standing in the middle of what used to be a big modern town, with shops, schools, housing estates, but the town is gradually disappearing in this jungle. It is like standing in the middle of a wilderness; you walk a bit and come across the remains of a school or a deserted house. Here you really see the force of Nature. In the past thirty years it has re-claimed the town.”

Before time stopped and Pripyat was covered with radioactive dust it was a thriving showcase of the Soviet regime. The town was established together with the nuclear power plant, on Moscow’s orders, as an elite satellite town that served those who worked at Chernobyl. Located just two kilometres from the plant, Pripyat had privileges other towns and cities could only dream of. Its inhabitants had higher wages than people elsewhere, they acquired flats and cars without having to save up and wait for them to be allotted for years. The town had three swimming pools, two sports stadiums and a cultural centre with a cinema and theatre house. The shops had goods unavailable in the rest of the country and even the communist top brass from Kiev, located 150 km away, travelled here to stock up on luxury goods. Pripyat was the place everyone wanted to live and young people flocked to it.

Photo: Michal Franc
Before the nuclear disaster 17,000 of its 47,000 inhabitants were aged under 18. The average age of the town’s inhabitants was just 26 years. Every year 800 children were born there and local schools were bursting at the seams. The slogan “the atom is a friend, not an enemy” was plastered all over the town. The mayor had rose bushes planted in all public places. He wanted a rose bush for every inhabitant. By 1986, when the disaster occurred, there were 33,000 rose bushes. The fun park under construction was never finished. The huge Ferris wheel still stands, covered in rust and creaking in the wind in the ghost town that Pripyat has become. The town’s luxury hotel for VIP guests last served the special commission investigating the accident and then the clean-up force deployed at the site of the disaster. The town’s inhabitants were evacuated a long 36 hours after the accident occurred. Their belongings are as they left them.

Michal says that one of the most emotive experiences was seeing the building of the local kindergarten, with its rows of small beds and the toys children clutched before the tragedy struck.

“The kindergarten building is one of the most emotive places in Chernobyl. There is this broken doll that says it all. Everyone who comes here takes a photograph. I think that after Barbie this is the second best known doll in the world - a doll that carries a terrible warning. I think thousands of people from all around the world have this photograph in their home archives.”

Martin says that as a technology buff he was captivated by a visit to the Duga radar – an enormous abandoned antenna hidden in forests of Chernobyl.

Duga radar, photo: Michal Franc
“I was really captivated by the Duga radar, which we had all heard about. We had a Czech-speaking guide, so I learnt a great deal about the construction. In fact I learnt a great deal in the two days we were there. We slept over in a Chernobyl hotel which was also an unforgettable experience and we were able to take a good look around.”

The Duga radar was part of an early detection system against attacks by ballistic missiles; in its time one of the most powerful military facilities in the Soviet Union's communist empire. It stands a towering 150 meters (492 feet) high and stretches almost 700 meters in length.

The radar was in operation from July 1976 to December 1989. In fact, two operational Duga radars were part of the Soviet early-warning system, one near Chernobyl in Ukraine, the other in eastern Siberia. The Duga systems were extremely powerful, over 10 MW in some cases, and broadcast in the shortwave radio bands. They appeared without warning, sounding like a sharp, repetitive tapping noise which made shortwave listeners nickname the radar “the Russian Woodpecker”. The random frequency hops disrupted legitimate broadcasts, amateur radio operations, oceanic commercial aviation communications, and utility transmissions, resulting in thousands of complaints by many countries worldwide. Today the radar is silent. It has become one of the tourist attractions drawing visitors to Chernobyl.

Photo: Michal Franc
“When we were headed for Kiev, along the Belarusian border we avoided the big roads and chose the smaller ones using a paper map. The Chernobyl zone was not on it, but suddenly we found ourselves facing a barrier with soldiers who said we could not enter the zone on our bikes. We were about to turn back when I realized I had a bottle of good Moravian brandy in my bag and brought it out. The soldiers immediately became friendly and for the bottle of brandy –the road was clear. So we have a picture of our motorbikes in the “forbidden zone”.”

Guided tours to Chernobyl, available in several languages, take visitors through the zone’s different sections and also offer a breath-taking birds-eye view of the area, with radiation safety guaranteed. The authorities are planning to gradually revitalize the area and to establish a Chernobyl National Park.