A tour of Prague’s most important cemeteries

A tour of Prague’s most important cemeteries

At this time of year, Prague’s cemeteries are carpeted with red and yellow leaves, and in this chilly weather, you are quite unlikely to bump into that many other visitors. Prague’s thirty-or-so city maintained cemeteries offer a step back from the hustle and bustle and traffic jams of the metropolis - and provide the visitor with a glimpse into the Czech capital’s history as well.

Olšany Cemetery, photo: Štěpánka Budková
In my bid to learn more about the city’s graveyards, I met Father Milos Szabo, who showed me around Olsany Cemetery:

“So here we are in the Olsany Cemetery, which is the oldest burial ground in Prague outside of the old city walls. It’s also the biggest burial ground in all of the Czech Republic. If I’m not mistaken, I think around 1.5 million people are buried here.”

The graveyard, located on 46 hectares in the Prague 3 area, has a rather colourful history.

“This cemetery was founded when a plague epidemic struck Prague at the end of the 17th century. It was too dangerous to bury plague victims in the middle of the city, beside their local church, as was custom. The king ordered Prague councillors to buy a patch of land outside the city walls. So they bought this ground here in Olsany, which was at the time outside of Prague, and they started to bury plague victims out here. And as time went on and Prague grew bigger, it was no longer just plague victims who were buried out here, but normal inhabitants of the new town as well.” 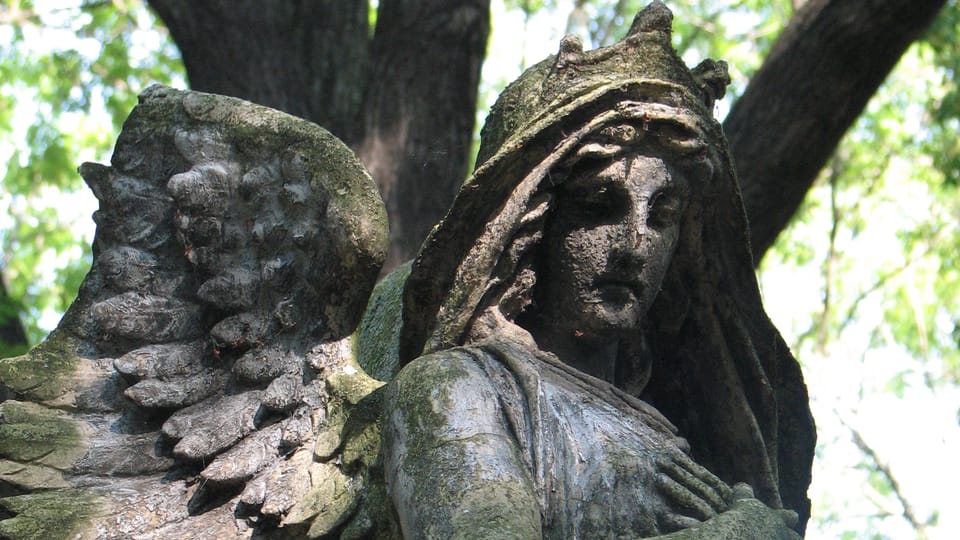 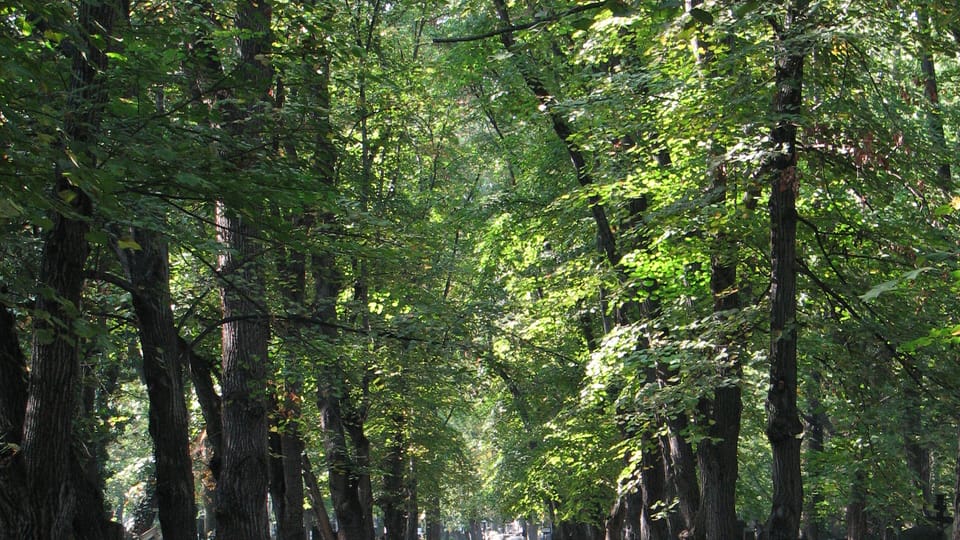 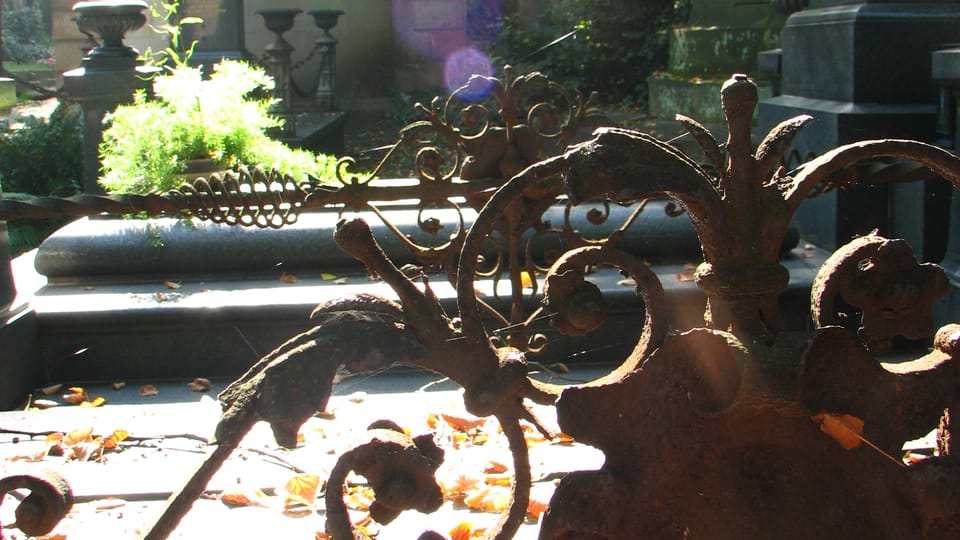 Olsany Cemetery is so big that it is difficult to find your way around. To combat this, and attract more people into the cemetery, Father Szabo came up with the idea for a series of signs, offering visitors something of a guided tour:

Olšany Cemetery, photo: Štěpánka Budková
“It was when I was walking around this cemetery and I realised that no one came here. I realised that all of the graves were bare, and that busts and statues were missing; they had been stolen by thieves, precisely because this was a deserted place with no one looking after it. And this is when I discovered that really quite a few famous, or at least remarkable, people were buried here. So it was then that I started to come to this cemetery often, to clean up the graves, note down names, then go hunting for information in various archives etc. The first information board was put up a year and a half ago. And then the idea really took off, and now today we have 24 signs up around the cemetery.”
Slavin, photo: Štěpánka Budková
Perhaps the highest concentration of famous names can be found in the graveyard at Prague’s Vysehrad, built on a rock overlooking the River Vltava and one of the most important places in Czech history and mythology. The author Jan Neruda, composer Antonin Dvorak and opera singer Ema Destinova are among the dozens of important cultural figures buried there. The last resting place of many of them is a pantheon called Slavin.
Vyšehrad Cemetery, photo: Štěpánka Budková
There is still one space left in the pantheon, but as Mr Vaclav Potocek, the keeper of the keys, says, it is unlikely that anyone will be buried there in future:

“There is still one space free in this tomb, but I think burying people in Slavin is a closed chapter now. Because the idea of burying dead people in the place that they worked, or where they lived or near their family, is the one that predominates in society today. It was like that with the Nobel-prize winning poet Jaroslav Seifert; his grave is in Kralupy, just north of Prague, where his parents are buried.” 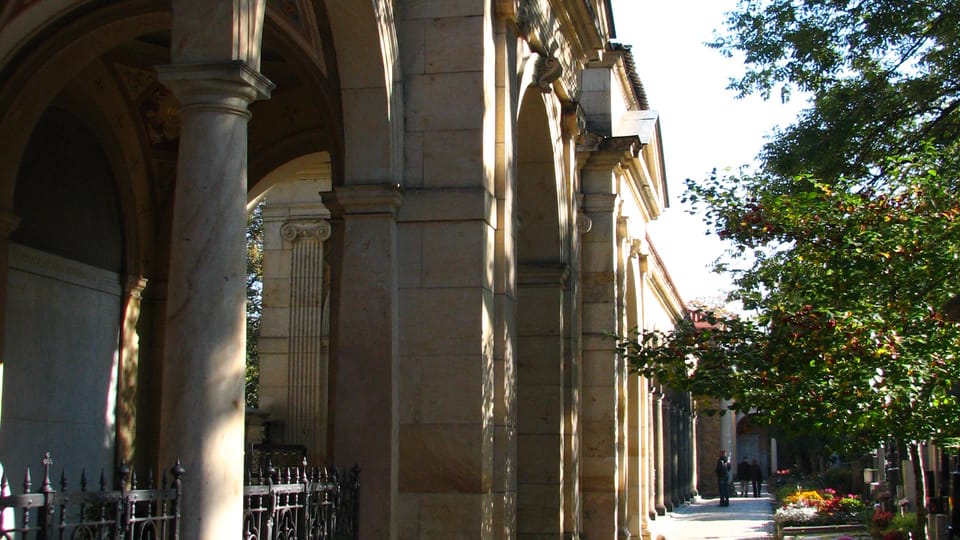 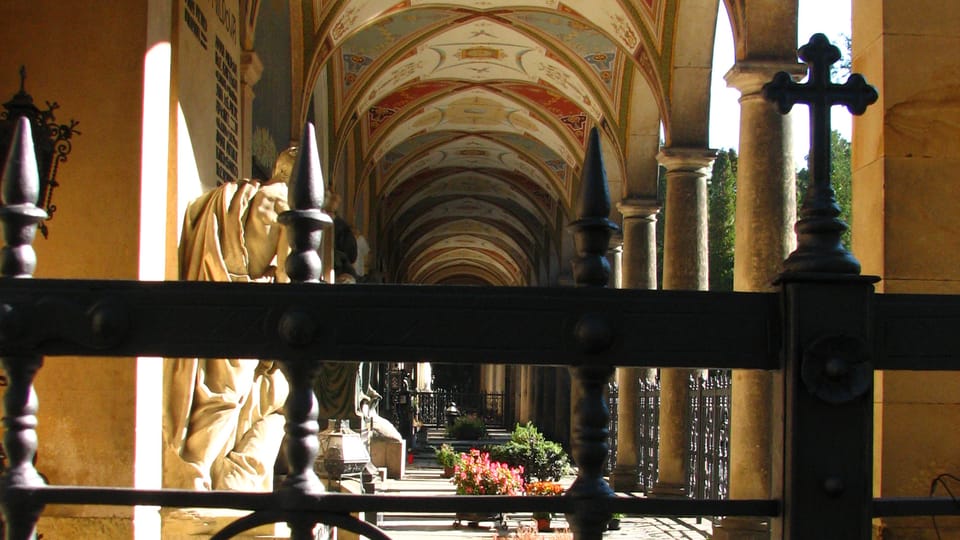 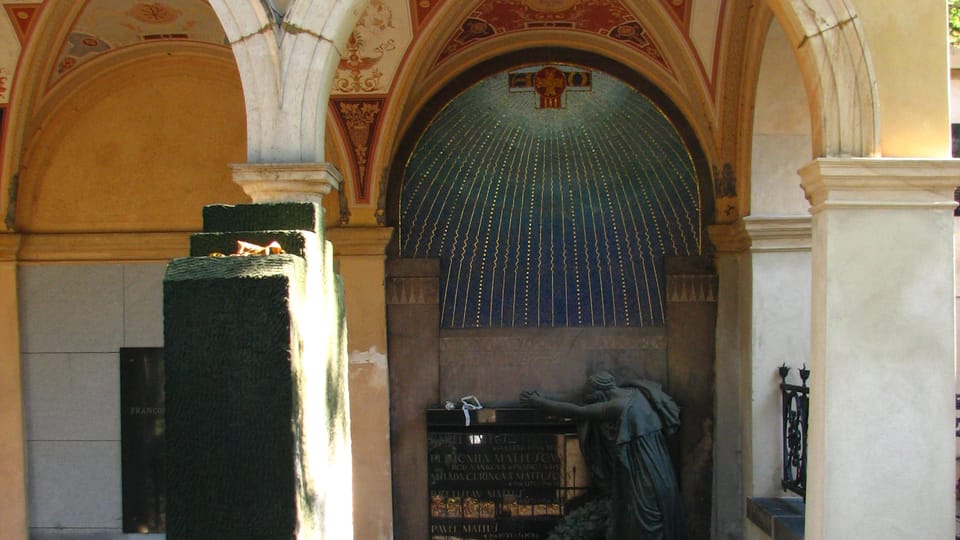 Mr. Potocek shows me inside the pantheon. It is splendid, with a mosaic ceiling and marble floor. But how does it compare to, say, its namesake in Paris?

“Obviously, you can’t compare Slavin with the Pantheon in Paris or the Wallhalle in Bavaria. They are much bigger in scale and were established for other reasons. There is one particular difference which I think exists between Slavin and them. In Paris, there are all sorts of people buried in the Pantheon, and in Germany, it is predominantly great soldiers who are buried in the Wallhalle. But here, it’s painters, writers, artists. So that’s the difference between our Slavin and these big grand pantheons which you find elsewhere.”

New Jewish Cemetery, photo: Kristýna Maková
Petr Kovarik is the author of a guide to Prague’s graveyards. I asked him to take me to one of his favourites, and so early on a crisp Tuesday morning, we met outside the gates of the New Jewish Cemetery, back in Prague 3, and not to be confused with the Old Jewish Cemetery in the centre of the city.

I asked him why he liked to visit cemeteries where he had no relatives buried:

“Each cemetery has its own particular charm. In almost every one you will find some sort of work of art. Graveyards are like open-air galleries in a way. People also call the Jewish cemeteries here in Prague gardens. And they really are like gardens in certain respects. They are very often like public parks too. In Prague we don’t have that many big parks, and cemeteries like the one on Olsanske namesti and as well the one we are in now – the New Jewish Cemetery – can be described as public parks. And when you walk around a cemetery, it is like reading a book you have never read before. You learn a lot of things. A cemetery is like an encyclopaedia or dictionary.”

“So here we can see on Franz Kafka’s grave – because not only Jewish people visit this place – that people have left flowers. Some have even left fake flowers, which don’t look right – perhaps they don’t know Jewish traditions. Someone has even planted a Christmas tree on his grave which is decorated every year. This is a decidedly Christian tradition, which is utterly out of place here.”

Photo: Kristýna Maková
Meanwhile, over at Vysehrad Cemetery, Jewish traditions are having an impact on the grave of the great Czech poet Karel Hynek Macha. Again, here’s Vaclav Potocek, explaining how a handful of chestnuts have ended up on the poet’s tomb:

“There is a rather interesting story surrounding these chestnuts on his grave. These chestnuts, and the stones. You know that Jewish cemeteries are often covered in these little stones? Well, this goes back to the forty years that the Israelites spent crossing the desert. When someone died during this time, for practical reasons, they covered the body in stones. This was so that wild animals and scavenging birds didn’t tear the body to shreds. And so from this we have the custom of laying stones on Jewish graves, which lasts until today. People have even started to do that here in this Christian cemetery too. And we even find people making Christian symbols, like crosses, out of stones on the graves here. And when stones aren’t available, people use chestnuts.”

Photo: Štěpánka Budková
When I asked my guides whether they had heard any ghost stories about Prague’s cemeteries, all three replied that I was much more likely to bump into a ghost in Prague’s Old Town than in any of these graveyards. So, maybe don’t go to the cemetery in Prague if you are looking for a scare, but do go if you are looking for a walk which will take you through centuries of Czech history.
Author: Rosie Johnston
tags:
run audio