Prague’s National Technical Museum – a treasure trove of past technology

The National Technical Museum – one of the oldest museums of its type in Europe – lies just next to Prague’s Letná plain. The museum was founded to document technological advancement both in the Czech lands and the wider world and contains tens of thousands of exhibits. Younger visitors and fans of vehicles in general can appreciate the museum’s large main hall, which features full-size original examples of historic aircraft, automobiles and trains – including that of Austro-Hungarian Emperor Franz Joseph.

Since at least the 19th century, the history of the Czech lands has been associated with technological prowess. That science and technology are held in high esteem in the country is affirmed when one encounters the towering National Technical Museum in Prague, whose 14,000 square meters spread over seven floors offer a vast array of exhibits focused on various aspects of science and technology.

Technology museum with a long history

It is also one of the oldest technology museums, with a history that stretches as far back as the eighteenth century, says director Karel Ksandr.

“Our museum is among the five oldest specialised technical museums in the world. Our origins stretch back as far as the eighteenth century, when the Union for Encouraging Industry in Bohemia [Jednota pro povzbuzení průmyslu v Čechách] was founded and subsequently, in 1791, Prague hosted the First Industrial Exhibition in the Bohemian Crown Lands.

“Our museum is among the five oldest specialised technical museums in the world.”

“However, the real beginnings of the museum date back to 1862, when Vojtěch Náprstek established the first museum of industry. What Náprstek focused on was collecting exhibits that represented the latest in technological progress, rather than old pieces of technology. For example, he brought the first pedal sewing machine to Prague.

“After his return from the United States, Náprstek also presented items that he had gathered at various international exhibitions to the American Ladies Club, one of the first Czech women’s associations in the Czech lands. He gathered tech inventions for example at the 1862 World Exhibition in London. We still have the exhibits that he collected here in our museum. Most of them can be seen in the household technology exhibition.”

Náprstek’s collections were an important start, but the first National Museum exhibition would come decades later, in 1908, when an initiative set up by professors from the Czech Technical University, reorganised the museum into a form that is recognisable today.

The actual museum building that now stands on Letná had not yet been built at that time. Instead, the original museum was situated in the Schwarzenberg Palace on Prague’s Hradčany Square. The Schwarzenbergs were supporters of the technical museum idea and offered their palace, which housed the exhibits until World War II, when it was repurposed to serve as a military museum by the Nazi occupiers, says Karel Ksandr.

“The technical museum’s exhibits were moved into the Invalidovna building in Prague’s Karlín district. Construction began on the building where we are based today in 1938. It was partly funded by representatives of Czech industry, such as Václav Klement of Mladá Boleslav, who was one of the founders of Laurin and Klement, the company that evolved into today’s Škoda Auto.

“However, construction progress ran into difficulties during the war. It could not be finished due to a lack of construction materials. Then, immediately after the war, it housed the Ministry of Post. The technical museum was finally moved here in 1948, but just into a few of the building’s exhibition halls. Two-thirds of the building were actually rented out to non-museum clients until 1990.

“The building, in the form that it had been originally intended, was only completed in 2013, so you could say that it took 75 years before it was finally complete.”

A source of education about both present and past

Today, the museum and its associated branches house more than 20 permanent exhibitions, covering disciplines such as aeronautics, engines, clockwork, mining, metallurgy, photography architecture, construction and more. The building’s wide halls also make it possible to fit in several aircraft, automobiles and even trains. This collection of heavy machinery makes it a particularly popular destination for families with children and aspiring engineers.

Karel Ksandr says that one of the things that make the museum stand out is its focus on keeping up with the latest times, rather than simply depicting historic objects.

“[We follow the mantra that] the museum should not be a storehouse for old objects, but rather a modern museum that has a wide range and serves as a source of education for the young.”

“Already during the beginnings of the museum, in 1908, Professor Josef Gruber issued a recommendation that the museum should not be a storehouse for old objects, but rather a modern museum that has a wide range and serves as a source of education for the young.

“Today, we are still trying to follow this rule. We house a lot of modern objects here, also using the example of Vojtěch Náprstek. For example, recently we were granted the first complete electric car designed by Škoda, the Enyaq.”

While the museum emphasises its connection with the present, it does house several unique historic objects as well. These include the Tatra T80 limousine of first Czechoslovak President Tomáš Garrigue Masaryk, or the personal train carriages of Archduke Franz Ferdinand and Austrian Emperor Franz Josef. The latter’s carriage was produced in Prague in what was then the Kingdom of Bohemia and was used by Czechoslovak presidents after the First World War, all the way up to Ludvík Svoboda in the mid-1960s.

The unique nature of these exhibits also means that they are sometimes used in filmmaking, says Karel Ksandr.

“Yes, a lot of those exhibits are also still functional so they are leased out to film makers. For example the carriage of Franz Ferdinand can be seen in the Czech film Dinner for Adele (Adéla ještě nevečeřela). It was used more recently in the French-produced film All Quiet on the Western Front. If strict security conditions are maintained and the objects are insured at high value, we are able to lease out these objects occasionally.” 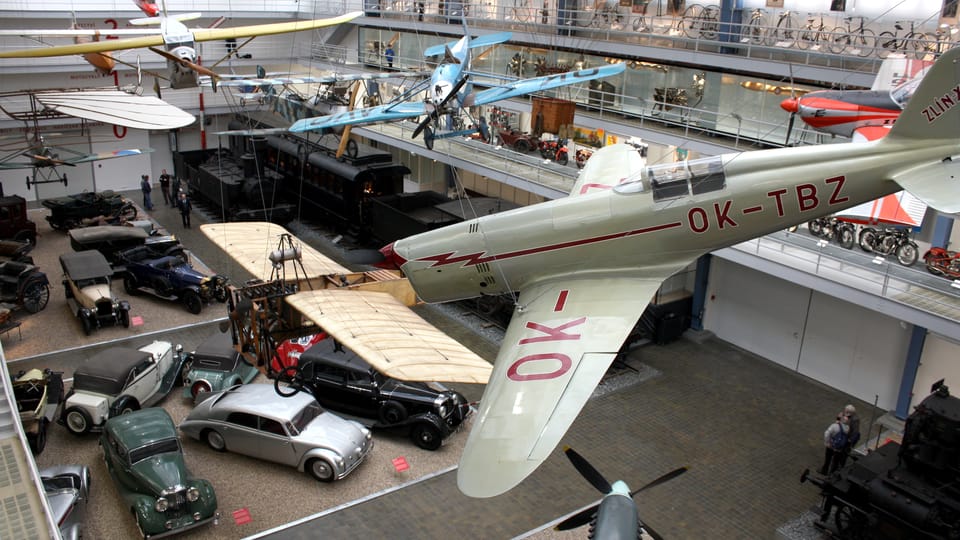 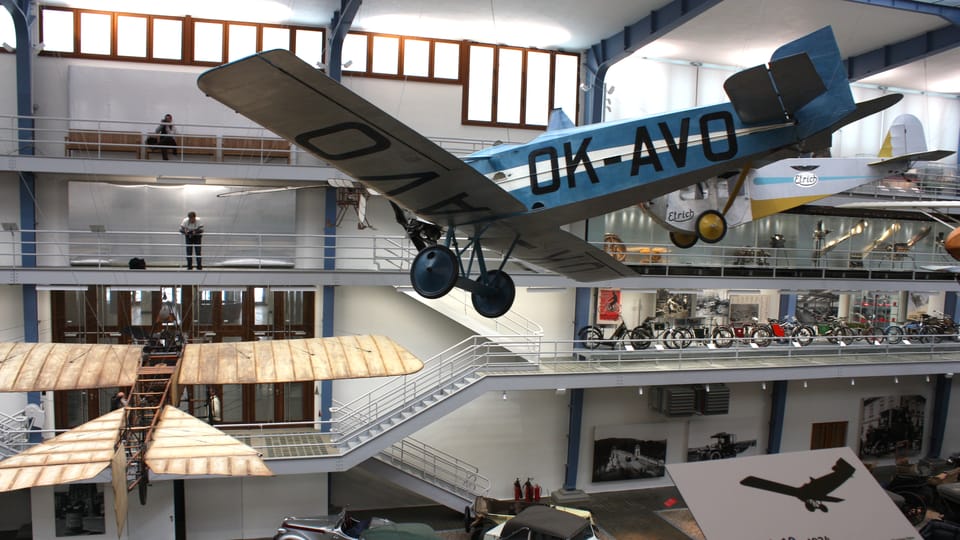 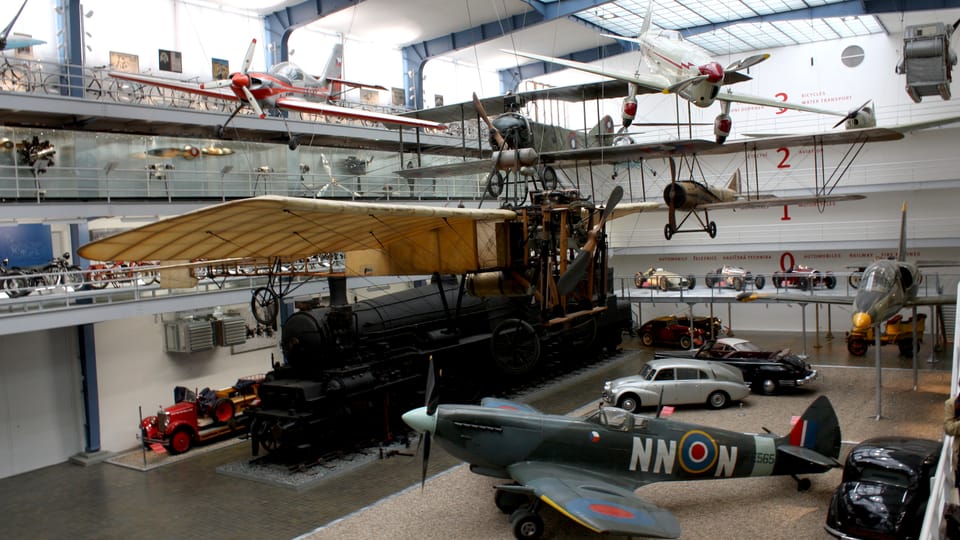 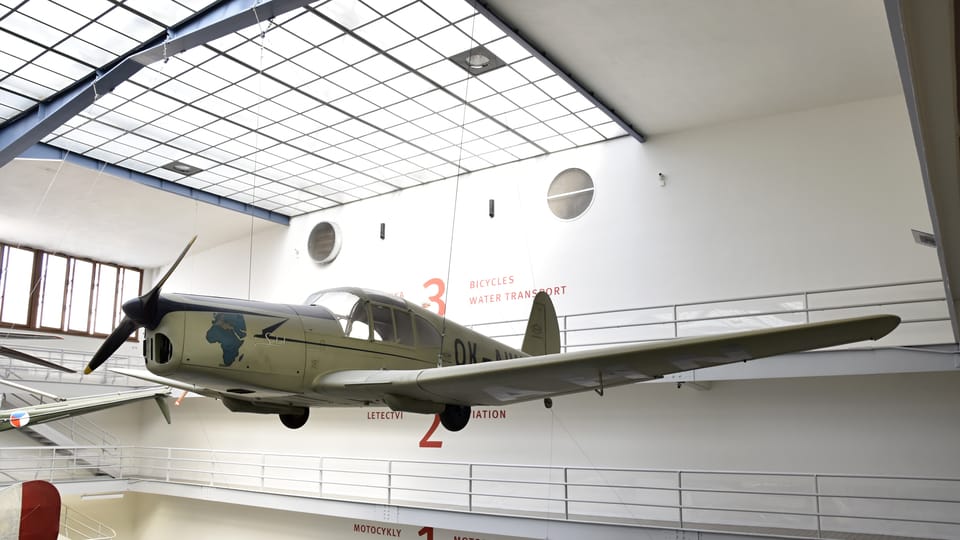 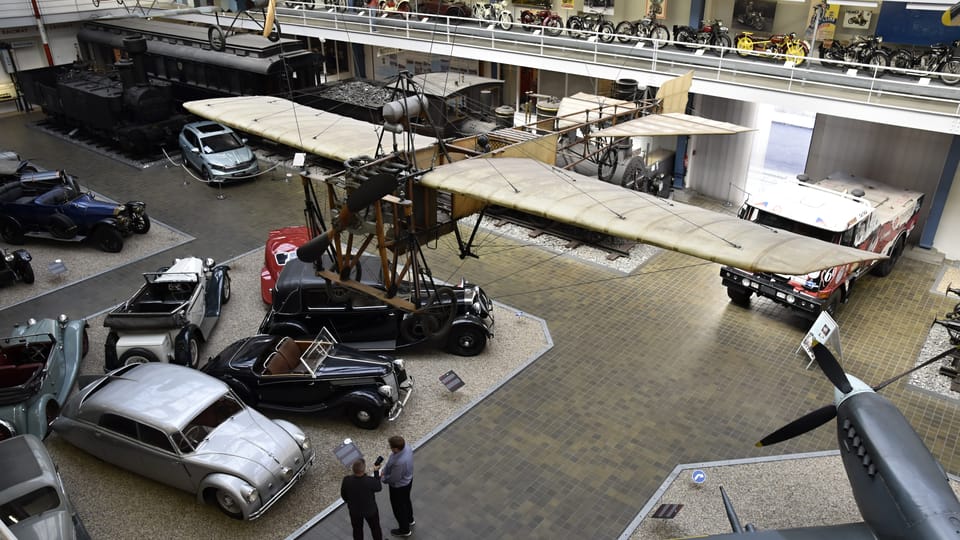 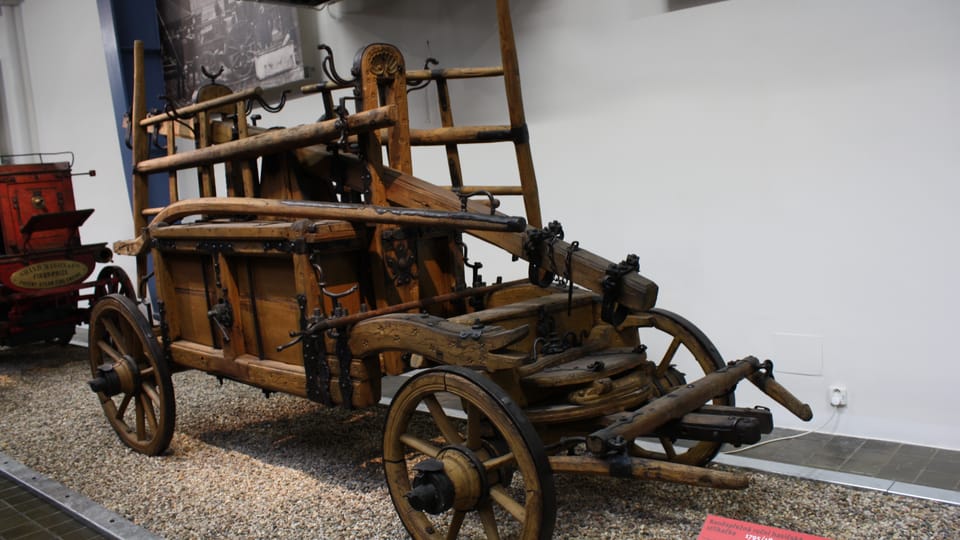 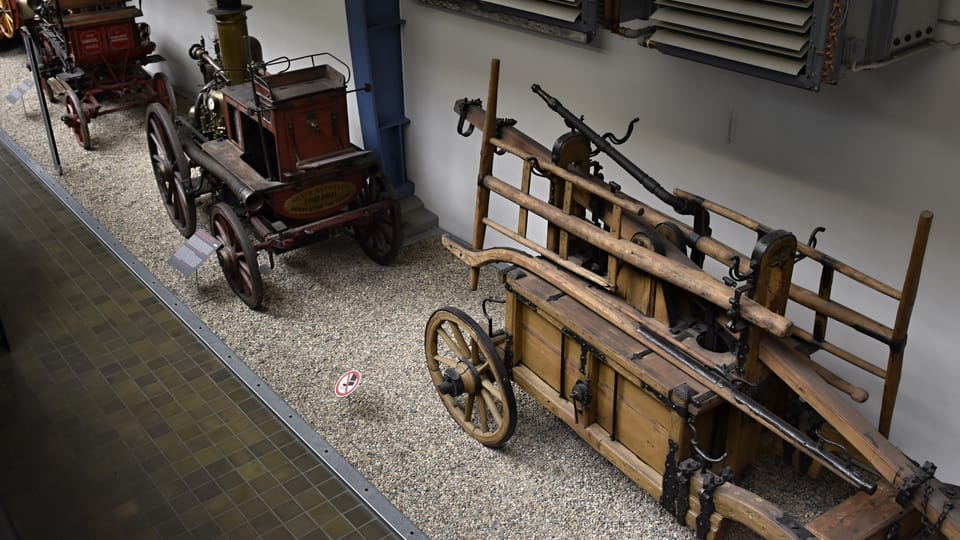 A diverse range of exhibits

Asked about which one is his favourite, the Technical Museum director reaches further back into history.

“As far as the individual exhibits are concerned, it is hard to choose. However, out of our wider astronomy exhibition I would like to mention the sextants from the time of Emperor Rudolf II, which were likely used by Johannes Kepler and Tycho de Brahe. It was during his time in Prague that Johannes Kepler discovered the laws of planetary motion that bear his name.

“A lot of [our] exhibits are still functional, so they are leased out to film makers.”

“Another thing to mention would be the golden Mercedes from the late 1930s which was used by the famous automobile racer Rudolf Caracciola. Eight of these vehicles were made and only two survive today. The car itself is a symbol of what was the cutting edge of technology at that time. It has an aluminium chassis and an engine block. Other cars worth mentioning include the oldest Bugatti and Audi models, dating back to 1911.

“One last object that I would mention is the radio desk from the building of Czechoslovak Radio on Vinohradská Street from which the famous call for help that started the Prague Uprising was broadcast on May 5, 1945.”

Czechoslovakia’s proud history of aeronautical engineering is also depicted in the museum through the installation of several full size aircraft. In addition to the plane of Jan Kašpar, with which he made the first long-distance flight from Pardubice to Prague in 1911, the museum also features a machine belonging to the French aviation pioneer Luis Bleriot. Meanwhile, the Zlín 13 aircraft, developed in the Baťa plants in Otrokovice, serves as an example of Czechoslovak 1930s monoplane design. Those who have a soft spot for military history will appreciate the full size Spitfire that hangs from the ceiling of the museum’s great hall.

One of the museum’s exhibitions is also dedicated to the history of cinema. It features, among other things, a piece of film belonging to Emile Reynaud – the first film that existed even before the work of the Lumiere brothers. The film is now held in two pieces, one in Prague and one in Paris. Both have been added to the UNESCO Memory of the World list.

Karel Ksandr tells the story of how one of these films ended up in Prague.

“In the 1930s the cinematography curator of our museum visited Mr Reynauld’s daughter and asked her if he could have that film. She snipped a piece of it off and gave it to him. This is why we have a bit and the rest is in Paris.”

It should be mentioned that the museum features a huge exhibition focused on the development of the printing press. Halls are literally filled with machines physically documenting its advances from the medieval period onwards. In the lower section museum there is also a recreation of a mine that is part of the exhibition on mining.

Meanwhile, those who are more interested in how life was different in the past are likely to appreciate the exhibition dedicated to the evolution of domestic technology. Everything from fridges and ovens through to television and radio sets are on show, tracking the evolution of households from the mid-1800s to the present.

Another aspect that makes the National Technical Museum entertaining is that it documents the interconnectedness of technology, specific inventions and the wider sciences. For example, a tour through the exhibition on chemistry features the machine which Otto Wichterle used to develop the soft contact lens. As Karel Ksandr explains, the instrument was developed with the use of a toy building set.

“When you look at this contact lens machine, you notice that this is no complex piece of technology. It is just a simple Merkur toy set from which Professor Wichterle built this device to grind contact lenses from raw hydrogel. Nevertheless, the invention had a huge international impact and is used by people today in all continents of the world.”

The National Technical Museum’s exhibits are so extensive and varied that it would take several days to properly view its extensive collections, but it is precisely this size and diversity that helps make it a worthwhile destination. Foreign visitors, who come for just one day, can choose whether to take a general all-round tour or use their time to focus on one or two specific branches of technology. Meanwhile, locals have an excuse to visit the museum several times, because it always offers something new to learn.

The National Technical Museum is open between Tuesdays and Sundays from 9am to 6pm. More information on specific exhibits and the history of the museum can be found on its website: www.ntm.cz